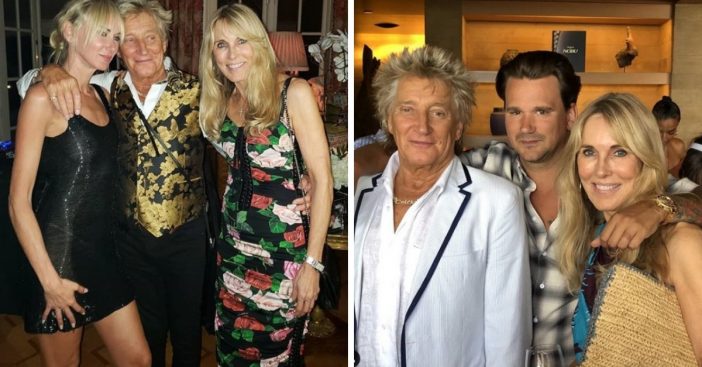 Rod Stewart is known for being a fantastic musician and for his infamous relationships. Rod has a total of eight children with five different women. He has been married three times and is currently married to model Penny Lancaster-Stewart. Recently, to celebrate his daughter Kimberly’s 40th birthday, he reunited with some of the mothers of his children!

It seems there is no bad blood between Rod and his exes. During his daughter’s 40th birthday, he posed with his current wife Penny and three of his exes, Kimberly’s mom Alana Stewart, Rachel Hunter, and Kelly Emberg. Some of the women shared the photos on Instagram.

The photo of Rod, his wife, and three of his exes

Kelly posted several photos and a video from the birthday party and captioned the post, “#[email protected]! Can’t believe you are 40! You looked radiant last night! #birthdaybash. A mother’s reunion!” It is so special that they can all get together with no drama.

One of Rod’s other children, Sean, turns 39 on September 1st. Sean and his mother Alana met up with Rod to celebrate an early birthday lunch. They shared a photo of the special occasion on Instagram as well.

Rod will be performing in Las Vegas, California, and the U.K. this year

In addition to celebrating some of his kid’s birthdays, Rod is getting ready to be very busy with his career! He currently has a Las Vegas residency called “Rod Stewart: The Hits” at The Colosseum at Caesar’s Palace. He resumes his shows on September 18, 2019.

He will also be performing in California and the U.K. during the end of the year. Have you ever seen Rod Stewart in concert? Did you realize that he has a total of eight children with five different women?

Learn more about Rod’s hit song “Sailing” and what it truly means!

Click for next Article
Previous article: The Farmer’s Almanac Predicts Winter 2020 To Be ‘Frigid’ And ‘Freezing’
Next Post: Eddie Murphy To Host ‘SNL’ For The First Time Since 1984