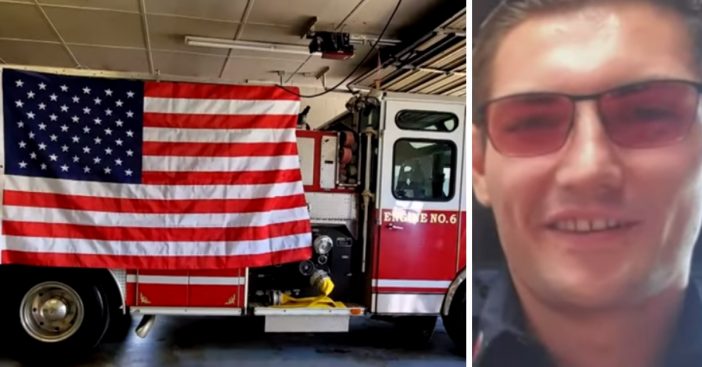 A color-blind firefighter named Spencer Caradine was able to see color for the very first time in his life. He chose to see the American flag. The beauty of the colors caused him to start crying. His friends caught the touching moment on camera. You can watch the video of Spencer below!

21-year-old Spencer works as a firefighter in Georgia. Spencer works at the Douglas County Fire Department. He has been color-blind his whole life, but never even realized it! He found out a few months ago while on a hike with his roommates. His friends realized that Spencer was color-blind and they had an idea.

There are glasses called EnChroma glasses that help color-blind people see colors. They are pretty expensive, running around $300-400. Spencer’s friends told the fire department about their plan to purchase these glasses and all of the guys chipped in. In addition, his friends made him take color-blind tests in the meantime.

On July 4th, Spencer’s friends and fire department surprised him with the glasses! The first thing he wanted to see was an American flag. They made sure to take him outside, so he would see the flag as soon as he put on the glasses.

According to Inside Edition, Spencer’s friend Jordan said, “I didn’t know how to explain why we had a 6-foot-by-10-foot American flag hanging off the side of the engine. I was like, ‘This is your first Fourth of July at the station. We’re having a big breakfast, that’s just what we do at the firehouse.’ Neither of us are emotional people at all and we both cried.”

Spencer wears his EnChroma glasses all the time now! He loves them and loves to experience things for the first time. For example, he saw fireworks for the first time in color this year. His firefighter friends even got him a coloring book and colored pencils so he can learn the colors. How sweet is that?

In conclusion, if you’re interested in EnChroma glasses, check them out on Amazon.

Check out the heartwarming video below to watch Spencer experience color for the very first time. Grab the tissues!

Seven firefighters from the same department all had babies within a few months!