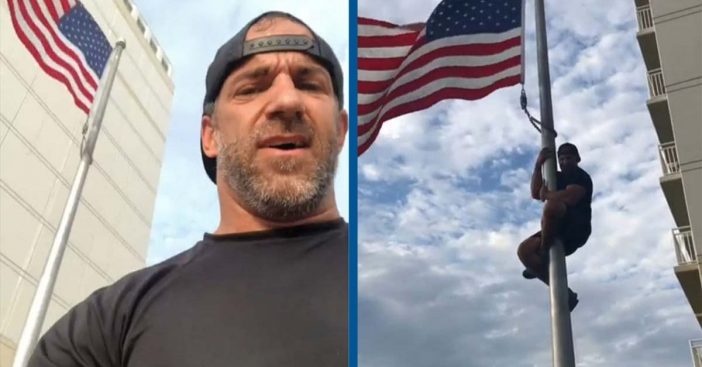 One veteran has climbed a flagpole to fix a loosely hanging American flag at a Navy SEAL monument. The veteran, who goes by the name of Dom Raso, is a former SEAL himself. He was on his morning run that day in Virginia Beach when he spotted the flag and took it upon himself to fix it right up on the flagpole.

A video seen on Facebook shows Raso climbing up the pole, clipping the flag’s loose end back to the pole, and sliding back down.

Veteran climbs flagpole in the name of patriotism

“This was my fourth attempt at trying to get up and fix the flag,” Raso says about the situation.

“I couldn’t go by this flag this morning and not give it everything I had. The gold stars on this monument and the sacrifice that has been made for us all was something I wasn’t just going to pass by. This flagpole climb reminded me about EVERYTHING in life.”

Raso has also encouraged viewers of the video to stand up and do what is right when given the opportunity.

“It doesn’t take many, it just takes a determined and convicted few,” he explains. “I believe with all my heart and soul there is a wave of patriots in this country growing in strength and confidence each day. While we watch parts of our country fall to mainstream confusion, complacency, and ignorance, there is a few that are willing to climb or stand or do whatever it takes.”

Watch the full video below; what an incredible act of patriotism!

One teen took it upon himself to mow the American flag pattern into his yard for the 4th of July. Take a look!

Previous article: Barber Pays Kids To Read A Book Out Loud During Their Haircuts
Next Post: Senate Passes 9/11 Victim Funds Bill By An Overwhelming 97-2 Vote