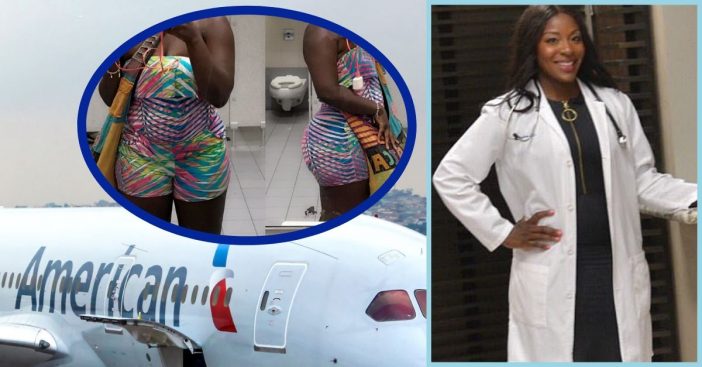 One Houston-based doctor is accusing American Airlines of humiliating her in front of her son and other airline passengers. She says that the airline tells her to wrap herself in a blanket or not be able to board the flight. This was because her outfit (a summer romper) is apparently “inappropriate.”

Dr. Latisha “Tisha” Rowe is a family medicine specialist and founder of a telehealth company. She was flying to Miami with her son for the month after vacationing in Jamaica. Staff take Tisha off the plane immediately after she boards due to her outfit and documents this on her Twitter account.

Tisha believes she is an unfair target

Here is what i was wearing when @AmericanAir asked me to deplane for a talk. At which point I was asked to “cover up”. When defending my outfit I was threatened with not getting back on the flight unless I walked down the aisle wrapped in a blanket. #notsofriendlyskies pic.twitter.com/AYQNNriLcq

“Here is what I was wearing when @AmericanAir asked me to deplane for a talk. At which point I was asked to “cover up”. When defending my outfit I was threatened with not getting back on the flight unless I walked down the aisle wrapped in a blanket. #notsofriendlyskies” she posts on Twitter. Tisha also speaks with Business Insider about the situation.

“I turned, and I looked at my backside, and I kind of gave myself that, you know, girl check,” she says. “Growing up, I lived in a very conservative household. Like, if my dad thought my shorts were too short, I was not leaving the house. So that’s just something that I’ve gotten into the habit of doing.”

“I have a very curvaceous body, and I put my body in bold colors, so you’re going to see it. But it’s not vulgar. It’s not inappropriate. It’s not bad, you know? If you put someone who’s a size 2 in the exact same outfit next to me, no one would be bothered,” she says.

Tisha says that she boards the plane with no problem. It is when she almost gets to her seat that staff escort her off the plane. “There was no explanation why I was called off the plane,” Rowe says. “And all she said was ‘do you have a jacket?'” On Twitter, Tisha continues, “After an AMAZING VACATION it’s ended with my son in tears with the blanket they asked me to wear to my seat over his head and will never forget this experience.”

American Airlines responds to the situation. They explain that they attempt to get in touch with Tisha following the incident, but are unable to connect. “We are proud to serve customers of all backgrounds and are committed to providing a positive, safe travel experience for everyone who flies with us,” they reassure.

Thomas Cook Airlines removed a woman from her flight as well for having an inappropriate outfit on.