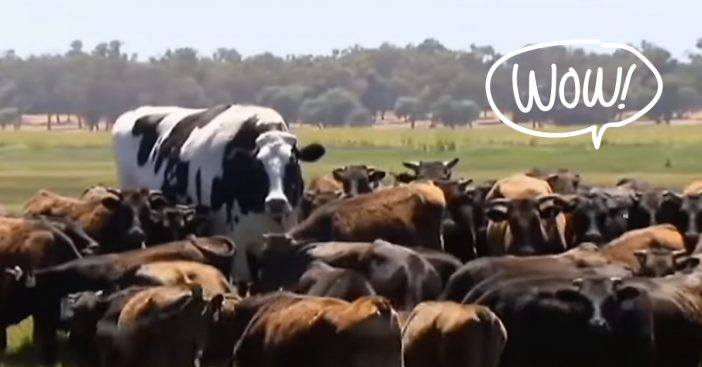 The Internet is buzzing about a photo of an extremely large cow. One giant black and white cow towers above tons of smaller brown cows. Keep in mind the proper name for this cow is a steer. A group of cows is generally called cows because they are all females. A steer is a male cow and can be much larger than females.

This particular steer lives in Australia and is adorably named Knickers. Knickers is 6’4″ and 2,800 pounds. He is a Holstein steer, which generally grow to be the largest of all cows. The other cows in the photo are wagyu cattle, which are commonly smaller at around 4 1/2 feet tall. Knickers looks especially large because he is standing around smaller cows.

See The Photo Everyone Is Talking About

To keep it in perspective, if Knickers was standing around his fellow type of cows and they were all around 6 feet tall, it wouldn’t look that unusual. Additionally, Knickers is around seven years old, while the other cows are only about one years old. Cows generally go to slaughter around the age of three, so Knickers has had a long life and lots of time to put on the pounds.

Right now, Knickers is believed to be the tallest cow in the entire country of Australia. His owners are unsure of why he grew to be so large. His parents weren’t particularly huge and he wasn’t that big at birth. However, many factors could come into play.

Where Is The Tallest Steer In The World?

Knickers’ genes could be the reason he is so large, but a DNA test would have to be done to find out. He could also have issues with his pituitary gland, which regulates growth. While Knickers is the largest steer in Australia, the largest steer in the world is in Italy. The record is held by a Chianina ox named Bellino who is 6’7″.

There was another large Holstein in California that was about the same size as Knickers, but he, unfortunately, passed away at eight years old this year from a calcium deficiency. According to reports, this steer ate 100 pounds of hay and 15 pounds of grain per day. The steer also drank 100 gallons of water per day.

The people who run the farm are happy that Knickers has gotten some recognition and the farm has gotten exposure, but they wish to be left alone. They said they still have lots of work to do every day and that while the photo is great, it is just a big steer.

What do you think about the photo? If you enjoyed this article and the photo, please SHARE with your friends who love cows!

Previous article: If You Are Always Freezing, Get This Jacket With A Built-In Heater
Next Post: Ralphie From ‘A Christmas Story’ Is In ‘Elf’ And No One Noticed Until Now