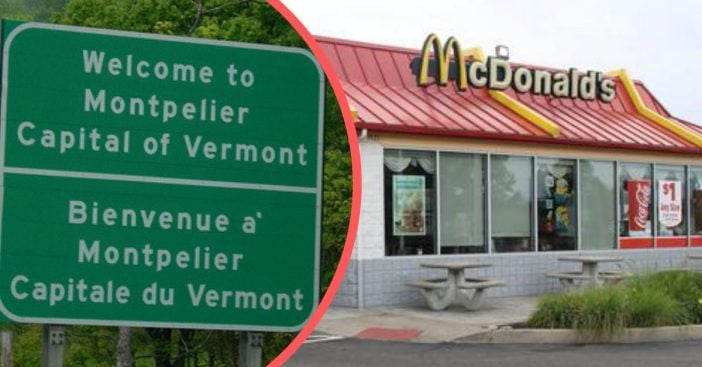 It’s a pretty common thing that, depending on where you live, there’s a McDonald’s on nearly every corner. At least you know you’ll never go hungry! However, there are McDonald’s storefronts located in only 49 out of 50 U.S. state capitals. How weird is that? Montpelier, Vermont is the one city out of the whole U.S. that does not have a McDonald’s in it.

Fox News reports that this isn’t as big of a surprise as it might seem. This is because Business Insider reports that the capital of each state isn’t always the biggest city. Montpelier is the smallest state capital in terms of population (7,500). They also favor local businesses over big, well-known chains. So, it makes sense why they wouldn’t have a McDonald’s there. However, this state allegedly has the most fast food restaurants in all of America!

Residents don’t need to travel far for burgers and fries

Don’t worry, the citizens of Montpelier don’t have to travel for if they’re craving some McDonald’s fries or a burger. The neighboring city of Barre has a McDonald’s as well as a Burger King! Ironically enough, the two chains face each other on Barre-Montpelier Road, which connects the two cities. This also isn’t surprising, because we often see similar chains right next to each other competing for business.

Even though they have to go to another city to get their McDonald’s, they can rest easy knowing they get fresh, homestyle burgers and fries from their local businesses! That sounds just as delicious!

According to AOL News, this was allegedly a rumor for quite a while until we had confirmation. From a group of people with the site called Montpelier Mythbusters, they have debunked or confirmed rumors, myths, and urban legends.

“Believe it or not, McDonald’s and its competitor, Burger King, have failed to enter the great capital of Vermont,” they say. “Montpelier is dedicated to keeping things local and has kept McDonald’s out for the time being. In fact, until 1996 the superstore, Wal-Mart, was kept out of our state as well. Incidentally, Montpelier, VT is also without an airport.”

Can you believe that a city in the U.S. actually doesn’t have a McDonald’s? Check out the video below of 10 countries where McDonald’s actually failed in business.

Recent reports show that Chick-fil-A is dominating the fast food industry and restaurants like McDonald’s should watch out.