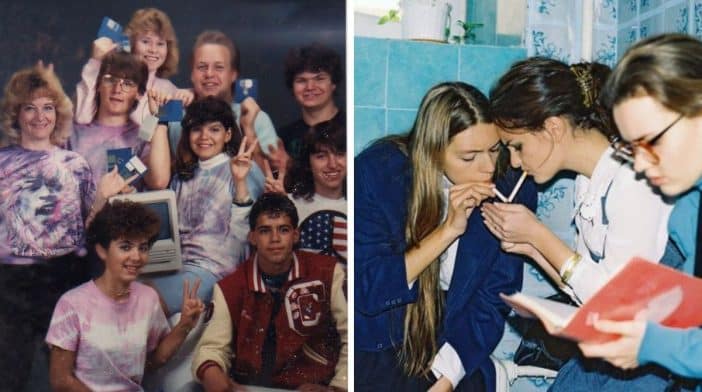 New generation kids do not know what it’s like to live in the ’70s and ’80s and most probably wouldn’t survive in that era. The world wasn’t like what it is now with the advent of the internet and the wide availability of information. To listen to a specific song back then, the person would have to go through the stress of using a pay phone to call the radio station to play it on air, and that is if the call went through.

Nowadays, you could just whip out your phone, open Apple Music or whatever streaming service, and start jamming whatever song you want to listen to. Millennials and Gen Zs would probably be shocked if they saw someone roaming their school premises with large knives unchecked, as that was the norm in the ’70s and ’80s.

How the thread started

My high school had a smoking area. For the kids. What’s something you experienced as a kid that would blow your children’s minds?

The walk down memory lane started with a tweet from Dan Wuori, senior director of early learning at the Hunt Institute, asking his followers to share “something you experienced as a kid that would blow your children’s minds.”

RELATED: One Mother-In-Law Has The Internet Buzzing About Boundaries And Manipulation

Some replied with their smoking experience because he shared that his high school had a smoking area for kids, something which is rare these days. One comment reads, “Mine too. Up until my senior year. Also, my biology teacher smoked in the classroom. We used to tell time by how many cigarettes she had in her ashtray.”

Another commenter shared his experience, “We had a smoking room IN our high school. We also had cadet training and a shooting range in the basement of the school. We had Latin as an option and could drop math in Grade 10! Also in the « good old days »: we could smoke in class at Carleton, at the movies and on airplanes.”

The discussion shifted from smoking to other areas of life. “I grew up in a rural area. It wasn’t unheard of for guys to have a shotgun in a gun rack in their trucks parked at school. Could also carry large knives and openly chew tobacco in school. They don’t allow any of this now, which is good,” someone else shared.

Still on schooling, “I have heard stories of country schools in the 50s (which are now urban schools) having boys swim naked in PE (that’s just how they did it in the country). Van Horn High School in Independence MO. I use this example any time people lament the changes from the “good ole days,” a tweet reads.

Click for next Article
Previous article: Husband Praised For Refusing Wife’s Stay-At-Home Request
Next Post: This Is Why Chick-Fil-A Employees Always Say “My Pleasure”