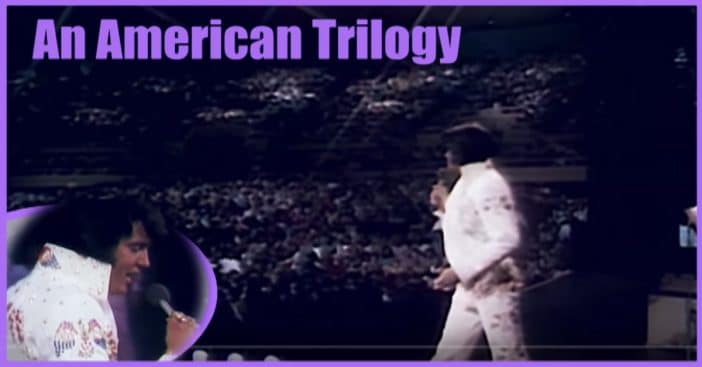 “An American Trilogy” is a song arranged by country songwriter Mickey Newbury and made popular by Elvis Presley, who began including the song as part of his regular concert routine in the 1970s, thereby making the song a showstopper.

It is a medley of three 19th century songs—”Dixie”, a blackface minstrel song that became the unofficial anthem of the Confederacy since the Civil War; “All My Trials”, originally a Bahamian lullaby, but closely related to African American spirituals, and well-known through folk music revivalists; and “The Battle Hymn of the Republic”, the marching song of the Union Army during the Civil War.

Lyrics to “An American Trilogy”

Oh I wish I was in the land of cotton

Old things they are not forgotten

Oh I wish I was in Dixie, away, away

Cause Dixieland, that’s where I was born

His truth is marching on

You know your daddy’s bound to die

But all my trials, Lord will soon be over

RELATED: Celebrities’ Yearbook Photos From Before They Were Famous