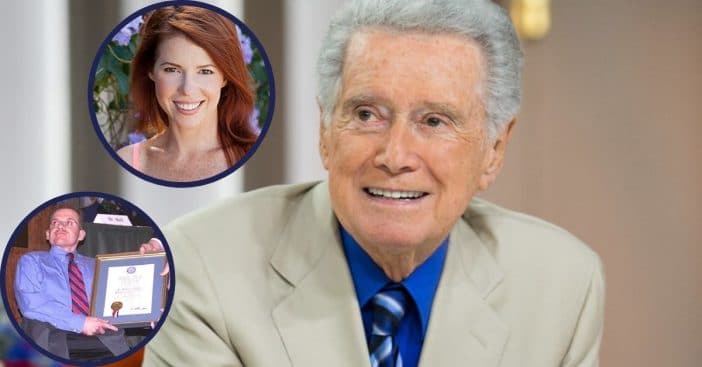 Regis Philbin was best-known for his most famous hosting gigs, such as Live! With Regis & Kelly and Who Wants To Be A Millionaire?. Beyond all that, though, he was definitely most proud of being a father to his four children, who are now all grown up. Sadly, on July 24, 2020, Regis passed away at the age of 88, and his kids go to great lengths to honor his memory. So, let’s see how each is doing today, while also revisiting when Regis first became a dad when he welcomed his first child in 1961.

These days, his kids (who will truly always be his ‘kids’) are full-fledged adults. Some of them have followed in their famous father’s footsteps, others have taken on different professions. Take a look and see what Regis’s kids are up to all grown up!

Daniel Philbin is from Regis Philbin’s first marriage. Sadly, Daniel died in 2014 at the age of 49 from natural causes. He was bound to a wheelchair his entire life due to a spinal cord defect. He also had both his legs amputated. Despite his disability, he spent a great deal of time in the Defense Department workforce. By age 37, he was among several others with disabilities honored by the Department of Defense for his contributions related to the 9/11 terrorist attacks.

Joanna was born in 1973 from Regis’s second marriage, in which Regis married Joy Philbin. She attended Brown University before earning her Master’s at the University of Notre Dame. Today, she is an accomplished author. Joanna has penned books such as The Daughters Take the Stage series, Rules of Summer, and Since Last Summer.

These days, the accomplished writer can be found in Los Angeles, where she lives with her daughter and their pug named Edie. Back in 2018, she was an honoree with the Writer’s Guild of America’s Feature Writer Access Project.

J.J. Philbin, or Jennifer Joy, was born in 1974. She received her Bachelor’s degree from the University of Notre Dame. Now, she is an accomplished Hollywood producer and screenwriter. She is perhaps best-known for her work with The O.C. drama series. She is also now married to producer Michael Schur.

These days, J. J. continues to strut her own production stuff as a producer and a screenwriter; someone’s following Regis Philbin into the limelight, while carving her own path! Her biggest credit so far comes from The O.C. Together with husband Michael Schur, they make up a powerful Hollywood couple, but found time to start a family of their own. They are the proud parents of a daughter named Ivy Elizabeth.

Amy Philbin Wiki | Biography
Amy Philbin is the well-known daughter of Regis Philbin. she managed to stay completely out of the spotlight. https://t.co/vlFMeaPpdU pic.twitter.com/JirQksbQbs

Amy Phiblin has managed to stay completely out of the spotlight so that almost no photos of her can be found across the whole internet. Reports indicate Philbin once pursued a career in singing, or a presence in the spotlight in general like Regis, but confirmed information does not extend far beyond that.

It is reported that Amy is the daughter of Regis with his first wife, Catherine Faylen, making her full siblings with Daniel.

Before his passing,, Regis continued to work as a contributor with TODAY and stayed busy to the end. He was actually spotted in West Hollywood discussing the since passed Alex Trebek during the Jeopardy! host’s cancer battle.

We’re glad to catch up with the families of Regis Philbin, and to hear they are doing well these days!

Take a look and see what The Beatles’ kids are doing… some of them look just like their fathers!