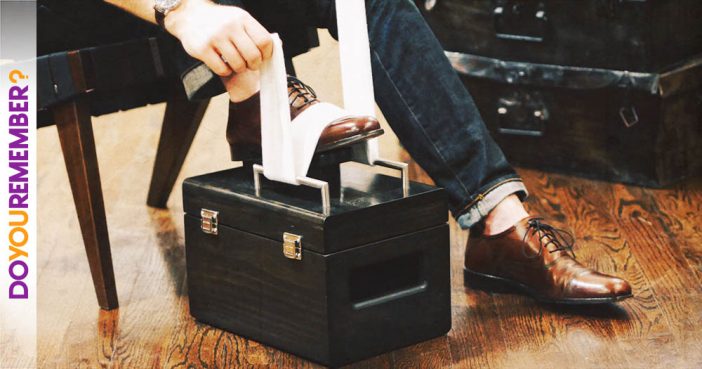 My parents bought me a shoeshine kit for Christmas when I was 12. My father, who was an impeccably neat, turned-out kind of guy, believed that no gentleman should ever be without a mirror shine on his wingtips or Gucci loafers. So when I think about my early influences, I am reminded of the oddly central role shined shoes played in my life.

Like lots of sons, my father occupied an oversize part in my upbringing. In his short life, he was my role model as a male and as a man. He taught me many things, important and not. Being put together, having the pride and confidence to look your best at all times, informs my life daily. Quality matters in all things, including shoes. Taking proper care of your quality possessions was his mantra. For shoes, that meant shoe trees (cedar) and shines.

Now, I imagine there are those of you who are thinking that their pal Serge sounds like he should be institutionalized for this insane rant. That may well be true, but for other reasons. While I live in the only part of the United States that has had consistently good weather this winter—Miami Beach—I watch news videos showing epic snow and ice storms relentlessly pounding almost everywhere else. Bad weather is never good for shoes, of course, but the real culprit is the salt that helps keep our sidewalks clear. It’s very difficult to look good when you’ve got a telltale white ring of dried salt adorning your Oxfords.

Big cities used to have lots of shoe-repair stores and shoeshine guys. Just like old-time barbershops that gave you the incomparable hot towel treatment, “taking a shine” is one of my male rites of passage, introduced by a neat and loving father. “Hop up,” the shine guy by my father’s office would croak, his raspy voice barely audible from too many Luckys and too many hours spent sniffing his chemical cleaning solutions. I imitated the other men who preceded me by pulling up my pants, giving him easy access to my shoes. I grabbed the nearby newspaper, and feigned nonchalance. I furtively snuck glimpses at his progress, as my muddied black dress shoes gave up their neglect and proudly reflected the overhead light.

I hopped off the elevated seat, and my dad patted me on my back. That pat meant a lot to me, as if, somehow, I did a good job having my shoes shined. But more than that, it meant to my dad that he had left a mark on his son and in doing so had fulfilled some of his fatherly responsibility. I can’t pass a shoeshine stand without hopping up, and thinking a lot about my dad.

Do You Remember this Retro Show Polish Commercial?