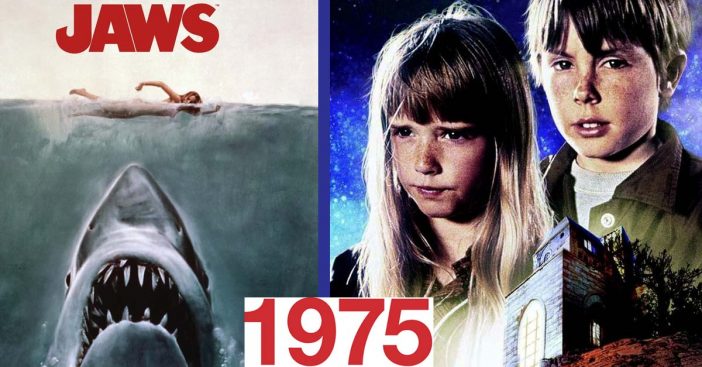 Do you remember the top 6 movies from the year 1975? It was undoubtedly a great year for some classic films to be released! Many of them we still watch today and relive the memories of going to see them for the first time in theaters. They range from all different genres from thrillers to comedies to even musicals.

We bet you remember and even still watch some of these movies! Many of them are still aired on television today as well. Here are the top 6 movies from 1975. Don’t forget to check out their original trailers, too!

There is a reason why Jaws claims the #1 spot for the top movies in 1975. The thriller film directed by Stephen Spielberg starring Roy Scheider, Robert Shaw, and Richard Dreyfuss became the highest-grossing international release by the year 1977 with worldwide rentals of $193 million, equating to about $400 million of gross revenue. The film won 3 Academy Awards.

Nashville claims the #2 spot on the list for top movies as a satirical musical comedy-drama film. Directed by Robert Altman, it was selected for preservation in the United States National Film Registry in 1992 and won one Academy Award. It also conjured up 25 other nominations for different kinds of awards. It was also known as the 27th highest-grossing film of that year.

The music within The Rocky Horror Picture Show has become a staple to listen to during the Halloween season! Starring Tim Curry, the musical horror comedy film was selected for preservation in the United States National Film Registry by the Library of Congress in 2005. The film grossed $139.88 million overall and won three awards.

Read onto the NEXT page for more top movies from 1975…