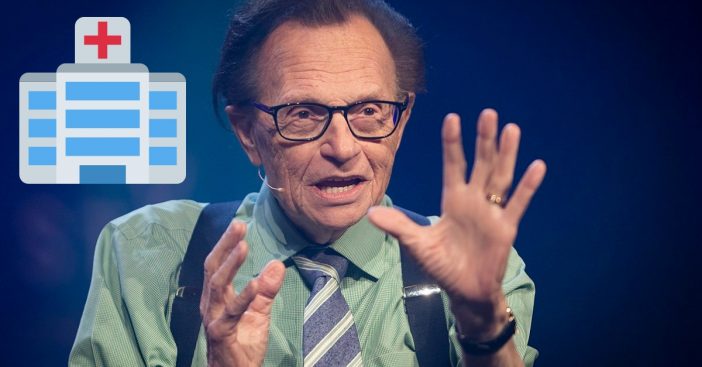 UPDATE: Larry King’s team has issued a statement that he did not suffer from a heart attack. This was a scheduled procedure. See the full statement below.

Unfortunately, Larry King has suffered from a heart attack and went into cardiac arrest last Thursday. Larry had been having difficulty breathing for the past few months and decided to get himself checked out. He was about to head to the hospital Thursday willingly to get an angiogram.

Right before he was heading to the hospital to get his angiogram, he suffered from cardiac arrest. An ambulance came to his home and took him to the hospital where they performed an angioplasty. This means they opened up a collapsed artery and inserted several stents.

How is Larry doing now?

Larry is currently 85 years old and still works as a talk show host. He is currently in the cardiac intensive care unit and is expected to be released on Monday.

We are so glad that he is expected to make a full recovery and head home soon!

Larry has been treating breathing problems for the past six months. Unfortunately, doctors did not seem to diagnose his underlying heart problem or realize how bad it was. Larry has been suffering from heart issues for 30 years. In the past three decades, he has had two heart attacks.

Larry has been working in radio and television since the 1950s. He has interviewed many famous people. He has also written several books, including two about living with heart disease. The books are called “Mr. King, You’re Having a Heart Attack: How a Heart Attack and Bypass Surgery Changed My Life” and “Taking On Heart Disease: Famous Personalities Recall How They Triumphed over the Nation’s #1 Killer and How You Can, Too.” Have you read either of these books? If you’re interested in these books, click on the links to purchase.

Larry also discovered a cancerous tumor in his lung in 2017 and had it successfully removed with surgery. We hope that his health issues are behind him now and he can continue doing what he loves, interviewing people!

Please SHARE to send your well wishes to Larry King! We hope he gets well very soon!

Learn what Larry King said about what 60,000 Interviews taught him:

Previous article: Woodstock 50 Festival Has Been Canceled
Next Post: How To Increase Your Chances Of Winning The Lottery