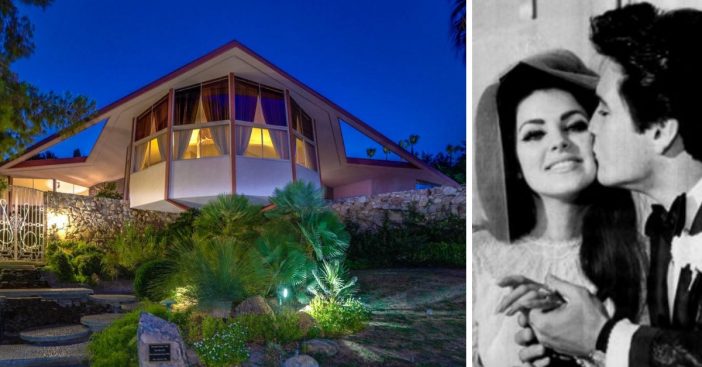 According to Zillow, the listing price for the home has gone up and down since early 2018. The home has often been called the “House of Tomorrow” for its futuristic qualities and decor. The home was built in 1960 and Elvis lived there for several years in the ’60s.

Originally, Elvis and Priscilla wanted to get married there, too

The couple planned to get married in the gorgeous California home, but news spread and they had to relocate for their actual nuptials to avoid the media. However, they stayed there for their honeymoon in 1967. The home still has many nods to the lovely couple, years after they actually lived there.

Elvis and Priscilla were only married until 1973, but they did have one daughter, Lisa Marie Presley. Years later, this home is still a landmark that reminds us of the couple. Right now, they hold Elvis-themed tours. Unfortunately, if you bought this home, the furniture does not stay.

Who built this iconic home?

The home was built by Bob Alexander. He built thousands of other homes in the area. The realtor selling this property says that you really just can’t reproduce the architecture of this classic home. If you tried, it would cost way more than the price of the home.

It has five bedrooms and five bathrooms. The home is very unique because it has many angles and curves that you wouldn’t see in a typical home, even a million dollar one. This is why it was called the “House of Tomorrow” by Look Magazine in 1962.

It is in a beautiful Palm Springs neighborhood and is the biggest home in that neighborhood. The home is 5,000 square feet, with a large and private backyard. It also has a really nice pool and incredible views of Mount San Jacinto.

If you had the money, would you want to purchase this home that previously belonged to Elvis Presley? Or do you not love the modern, futuristic feel of the home?

If you enjoyed this article, please SHARE with all of your friends and family who are fans of Elvis and Priscilla!

Check out a video tour of Elvis and Priscilla’s honeymoon home that is now up for sale: