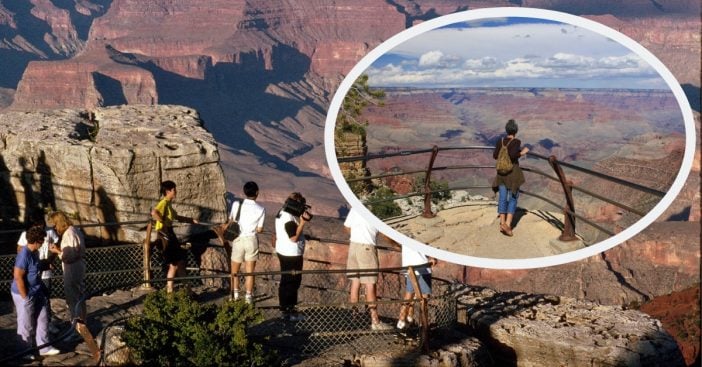 It has sadly been reported that another woman has died from falling to her death at the Grand Canyon. Reports have been surfacing just about every week about people accidentally falling off the rim and dying. Park rangers responded to the situation after 1 p.m. on Tuesday, April 23rd. They were briefed that someone needed help at a rocky point of the Pipe Creek Vista.

However, before park rangers could arrive at the scene to help out the visitor, the person had already fallen off the rim. The woman was identified as Cynthia Ackley, 69, of Peoria, Arizona. Her body was recovered about 200 feet below the rim.

There have been multiple deaths reported at the Grand Canyon over the last several weeks. According to reports, this is the fourth death in the Grand Canyon that was caused by an accidental fall. Back on April 3rd, a 67-year-old man fell to his death over the rim east of the Yavapai Geology Museum.

Another man from Hong Kong fell to his death on March 28th while trying to take pictures. The recent accident concerning Cynthia Ackley was the fifth death that occurred in the park this year so far overall (other deaths that occur at the Grand Canyon include heat-related deaths or plane crashes).

Grand Canyon National Park spokeswoman Vanessa Ceja has released a statement upon the news of the most recent death. She explained that last year there were 17 deaths inside the park. She also described the park as a “very drastic environment for people” and says that the park urges its visitors to be aware and cautious of their actions.

She has said time and time again that visitors should stay on the designated trails and walkways and always keep a safe distance away from the rims. She has also recommended staying behind railings and fences as they are there for a reason.

The most recent death of Cynthia Ackley is currently being investigated but is considered an accident as of right now. The Grand Canyon is one of the most-visited National Parks in the United States. In 2018 alone, there were more than 6 million recreational visits.

We hope that these accidental falls decrease in time and more people become cautious of their actions when visiting!

Be sure to SHARE this article to spread awareness about proper safety procedures when visiting parks such as the Grand Canyon!

Don’t forget to watch the full news coverage on the story of this unfortunate fall at the Grand Canyon below:

Previous article: WATCH: Make Your Own Beautiful Log Planter For Your Yard
Next Post: Eight Amazon Items Every ‘Golden Girl’ Fan Needs In Their Life