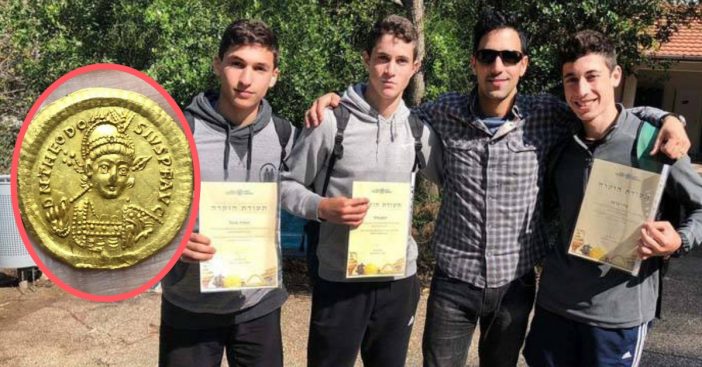 9th-grade students in Israel accidentally uncovered one of the rarest items in the world recently. Four students found a Byzantine gold coin near a stream in the Galilee region. They quickly realized how old the coin was and submitted it to their geography and history teacher. They didn’t know how important it would be though!

Their teacher showed the gold coin to the Israel Antiquities Authority. The coin shows Goddess Victoria holding the Staff of the Cross. It also shows an image of Byzantine Emperor Theodosius II. It is a very rare and beautiful coin indeed!

Find out what the experts said about the rare coin

According to Fox News, Dr. Gabriela Bijovsky, a numismatic expert at IAA said, “The gold coin is a solidus minted by the emperor Theodosius II in Constantinople (now Istanbul) around 420–423 CE. Similar coins are known from the Eastern Byzantine empire, but this is the first of its type discovered in Israel. One side depicts the image of the emperor and the other shows the image of the Goddess Victory holding the Staff of the Cross.”

What did the boys receive for finding and handing in the coin?

The four boys got a certificate for good citizenship by the IAA. What an incredible story they have to tell for the rest of their lives!

This isn’t the first rare find that has been found in Israel in recent years. Last year, a 1,500-year-old painting of Jesus Christ’s face was found in an old church in the desert. Archeologists also found a 1,500-year-old pool and fountain near what was a church site in Jerusalem. These pools date back to the 4th and 6th centuries A.D.

Two years ago, archaeologists found a 1,500-year-old Christian mosaic with ancient Greek inscriptions. Old churches have also been uncovered in the past few years as well. It is pretty incredible to see these gorgeous pieces of history uncovered in Israel! What do you think about this gold coin that four schoolboys found?

If you enjoyed this article, please SHARE with your friends and family who love seeing old historical items like this!

Watch the video below to learn more about this amazing coin that was found recently in Israel and the history of the coin:

Previous article: ‘All In The Family’ And ‘The Jeffersons’ Are Getting A Reboot Special
Next Post: Sandals Resorts Is Giving Away Free Vacations To Nurses, Moms, Teachers, And The Military