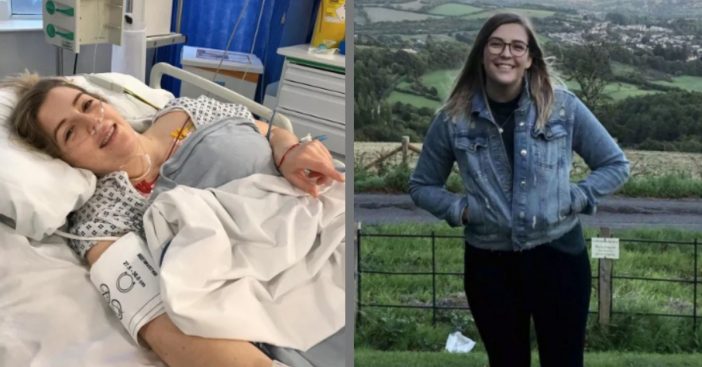 A woman by the name of Natalie Kunicki, 23, suffered a stroke after cracking her neck while stretching. This left her partially paralyzed on the left side of her body. This was due to rupturing a major artery while simply stretching! Natalie is a paramedic based in London and was part of the London Ambulance Service.

She was allegedly watching movies with a friend in bed when she stretched and heard something crack. About fifteen minutes later she went to the bathroom and collapsed on the floor, unable to move her left leg. Natalie talks more about the experience below, so keep reading!

Natalie spoke to news outlets about the experience when she realized she was having a stroke. “I got up and tried to walk to the bathroom and I was swaying everywhere… I looked down and realized I wasn’t moving my left leg at all then I fell to the floor… I thought it was too unlikely it would be a stroke when I should have known much better,” she recalled.

She originally thought she had a bit too much to drink and was afraid to call for help because she didn’t want her colleagues to see her “tipsy.” She eventually did call for help, though, and underwent a three-hour surgery.

“The doctors told me later that just that stretching of my neck had caused my vertebral artery to rupture… It was just spontaneous and there’s a one in a million chance of it happening,” Natalie said.

Turns out that the rupture of an artery in Natalie’s neck caused a blood clot in her brain, which then led to a stroke. Thankfully, doctors were able to repair the artery, but they weren’t able to remove the blood clot. The doctors apparently believe that it will dissolve in time. The left side of Natalie’s body was almost entirely paralyzed by the stroke.

“At the start, I couldn’t move my thumb and forefinger… I could kind of move my wrist up and down. I couldn’t lift my arm. I could bend my left leg but I couldn’t wiggle my toes,” Natalie said.

Doctors aren’t sure when or if Natalie will make a full recovery, but she’s already regaining mobility in her left side and plans to be back at work for “light duty” in six to twelve months. “People need to know that even if you’re young something this simple can cause a stroke,” she warned, “I wasn’t even trying to crack my neck. I just moved and it happened.”

Be sure to SHARE this article to spread awareness about just how easy it is to suffer a stroke and become paralyzed. It could happen to anyone! We wish the best for Natalie during her recovery.

Check out the video below of Natalie slowly regaining her ability to walk, move her fingers, and do other things that require movement: