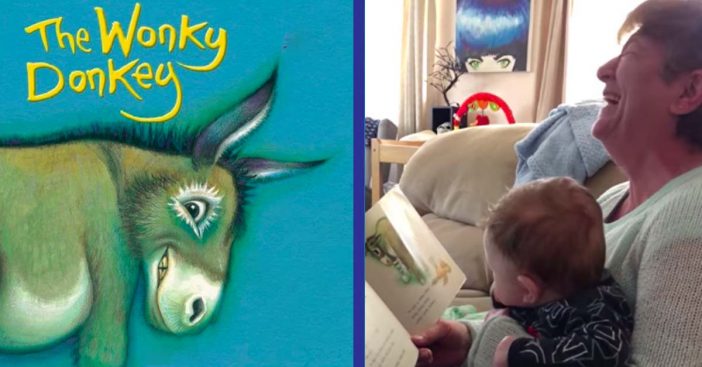 It is seriously impossible to watch this entire video without laughing! One Scottish grandmother decided to read children’s picture book The Wonky Donkey to her grandson and it became increasingly harder and harder to read the book as she erupted in tons of giggles.

Grandmother Janice Clark couldn’t help but laugh as she read the story to her 4-month-old grandson Archer. The Wonky Donkey was actually based off New Zealander Craig Smith’s song of the same name, which adds a new adjective to describe the donkey until it’s so incredibly bizarre to say out loud that we start laughing, too!

The final page of the book ends with “spunky, hanky-panky cranky stinky dinky lanky honky-tonky winky wonky donkey,” and this one grandmother just cannot get all the words out without laughing! Even the person behind the camera can’t help but giggle.

“Oh dear, how can anybody read this seriously,” says Clark. “This is going to kill me.”

Now, since the video has been posted and has amassed about 3 million views to this date, Smith says that demand for the book has sky-rocketed. He reported that his publisher was “rushing to print another 50,000 copies, with a view for more,” all because of this one video that has everyone laughing!

“The video is gold. Watching Janice read and laugh was just delightful, and like many, her infectious laugh had me laughing too,” Smith said after watching the viral video, “I’ve always wondered why sales had not taken off so much in the UK and US, but that looks like that’s about to change.”

The Wonky Donkey, illustrated by Katz Cowley, had originally sold more than 1 million copies worldwide, but the majority of that was from Australia and New Zealand. Since the viral video, there has been a tremendous rise in sales in both the UK and the US and is glad to see the book rise from its original title as an ‘underground success’.

“I am so glad that Wonky’s reputation has finally come to bite him on the bum on this side of the world thanks to ‘Wonky’s Guardian Granny’. I couldn’t be more delighted,” Smith said. He also calls the Scottish granny “a reminder in life, when all else fails, to fall about laughing. She has a spirit like Wonky’s.”

Be sure to SHARE this article if you’ve ever read or heard of The Wonky Donkey!

Be sure to watch the full video below and get ready to crack up laughing: