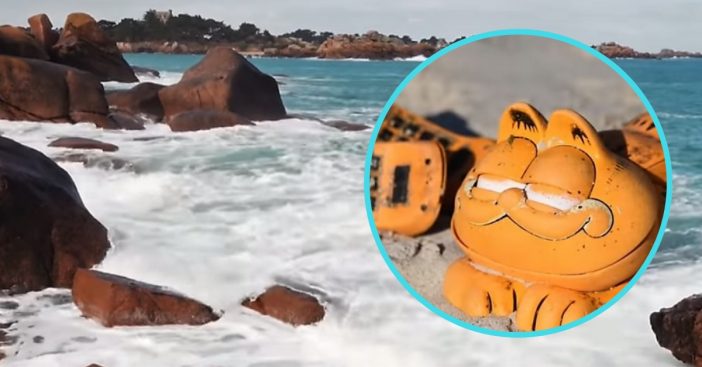 For over 30 years, Garfield telephones have been washing up on the shores on a beach in France. It was a really strange phenomenon and no one could figure out where they were coming from… until now. The mystery of the Garfield phones washed up on shores has finally been solved.

Since the mid-1980s, plastic pieces of Garfield phones and sometimes whole phones were found in northwestern France. Some of them were actually in pretty decent shape, especially after being in the ocean for who knows how long.

So, where were they coming from?

Many people started looking for the shipping container. A local farmer finally found it! It was actually in an underwater cave that was only visible during low tides. When the tides were low enough, journalist and environmentalists went hunting to find the shipping container. The container, which still contained some of the Garfield phones, was found! Mystery solved!

Now environmentalists in France use the phenomenon to teach kids about ocean pollution. Kids are often excited about finding these Garfield phones on shore. It makes sense to teach them about this issue and how harmful it is to dump anything plastic in the ocean.

We hope they can clean up the ocean after discovering where the phones were coming from!

Unfortunately, for now, the problem keeps occurring and phones are still washing up on shore. Very strange, indeed. What do you think happened? Why was the shipping container dumped in the ocean in the first place?

Check out this awesome vintage ad for the Garfield phones

If you have one, how much are they worth these days? Vintage Garfield phones are going for around $100 on eBay currently. If you have one and it is in good condition, you might want to consider selling it for extra cash!

If you found this article interesting, please SHARE with your friends and family, especially if they had one of these Garfield phones back in the day!

Watch the video below to learn even more about this crazy story: