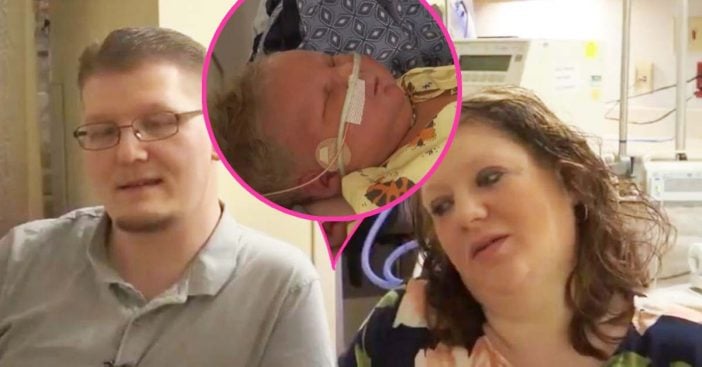 A mother in New York may have just set a record and it was a painful process to get there. A woman named Joy Buckley recently gave birth to her second child (she has three children, one is adopted). The child is a girl named Harper and weighed 15 pounds at birth! She set the record for the largest baby born at the Arnot Odgen Medical Center and she may be the largest baby born in New York’s history.

Harper was born on March 12, 2019, and was 15 lbs., 5 oz. and 23.2 inches when she was born. Joy is now a mother to three, but it definitely wasn’t an easy process. Joy and her husband Norman spent the last seven years trying to have another baby before getting pregnant with Harper. They were told by doctors they had only a 15% chance of becoming pregnant many years ago.

Find Out How Big Joy’s Other Baby Was At Birth

After being told years ago they had a slim chance of having a baby, they adopted a daughter. However, soon after they adopted, they got pregnant! Joy and Norman had a boy around two years ago. He weighed 11 pounds at birth, which is also quite big!

If you have had a baby, what did they weigh at birth?

What Did Joy Say About The Delivery?

Joy says that delivering a baby that large was excruciating. She had three doctors surrounding her and eventually had to have a C-section. They even had to use a medical vacuum to pull Harper out because she got stuck under Joy’s ribcage. Joy describes the experience as being hit by two tractor-trailers. Yikes!

Harper had to go to the NICU because of the traumatic birth, but both mom and baby are currently doing well. Joy now hopes to inspire other women out there struggling with infertility.

She is proof that having a baby is possible, even when your chances are said to be slim! Officials are currently looking into records to find out if Harper is the largest baby born in New York’s history.

What do you think about this story? Can you believe that someone delivered a 15 lb. baby? That sounds awfully painful! If you found this story inspiring, please SHARE with your friends and family!

Check out this video to learn more about Joy, Norman, their kids, and their heartwarming story: