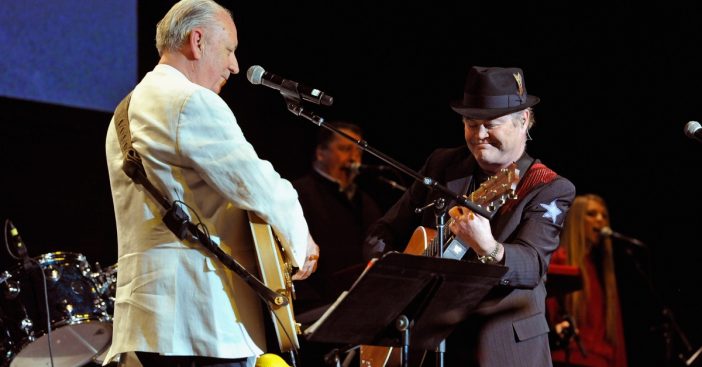 The Monkees announced a June 2018 tour of the Mike & Micky Show titled (get ready for this mouthful) The Monkees Present: The Mike & Micky Show (A Very Special Musical Journey from “Last Train to Clarksville” to “Me & Magdalena”). Consisting of Monkees members Micky Dolenz and Mike Nesmith, it was not unusual for Peter Tork (who was alive at the time) to not be included in the tour lineup.

Rumors spread of Peter Tork’s health problems that were keeping him from touring with the other two members, so it was really just Mike and Micky on the go. However, upon the initial announcement of the tour, their plans took a back seat when Mike started suffering from chest pains and had to undergo quadruple bypass heart surgery. This, ultimately, caused them to have to reschedule the entire tour.

Well, Mike and Micky finally returned to their regularly scheduled programming! After rescheduling the tour, they soon found out that Peter Tork had died on February 21st. Upon this news, Mike and Micky made the entire show a tribute to their long-time band member and friend. One of the shows that were rescheduled (and was also the show where Mike experienced his heart problems and had to cancel the show) was at Glenside’s Keswick Theatre.

According to a review of this March 6th show, despite it being a tribute to Tork, it “remained a lively presentation that refused to ruminate on nostalgia or sorrow.”

With a 10-piece ensemble behind Mike and Micky, the show proved to be a hit and the tour is undoubtedly a refreshing time for not only the remaining band members but the audience and fanbase as well. The set contained nearly 30 songs of their impressive musical repertoire, including some notable Monkees hits like “I’m a Believer”.

Other songs from the set include “Good Clean Fun,” “Clarksville,” “Birth of an Accidental Hipster,” “St. Matthew,” “Circle Sky”, and “Papa Gene’s Blues.”

It’s without a doubt one of the coolest and most rewarding opportunities to see these two remaining members of The Monkees, in their ’70s, still playing with the same passion they had years ago. The review of the Glenside show ended with a humorous jab at the Rock and Roll Hall of Fame.

“For anyone who still holds a grudge that the Monkees were once a manufactured band (we’re looking at you, Rock and Roll Hall of Fame nominators) wise up: Mike & Micky played their hearts out.” The Monkees definitely deserve a spot in the Rock and Roll Hall of Fame whether they were a manufactured band or not. Who else thinks so?

Stay up to date with the rest of the tour dates and see if they’re coming to your city!
Be sure to SHARE this article if you’re happy for Mike and Micky coming back to performing!

Check out the video below from one of the soundchecks from a March 1st, 2019 show: