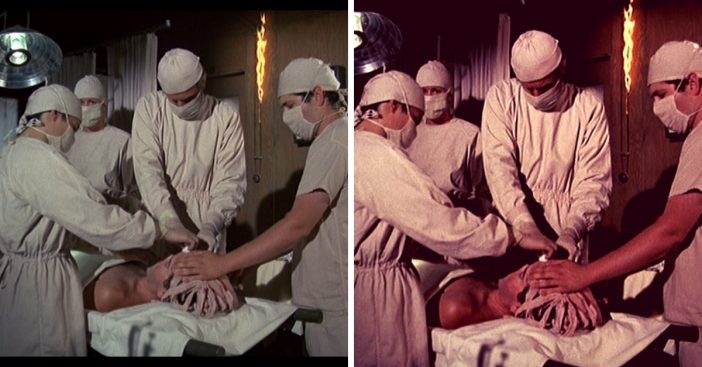 M*A*S*H was originally a movie in 1970. A few years later, it was adapted to become a television show. It was one of the most popular TV shows, running on the air from 1972 to 1983. The series finale is still one of the most watched series finales of all time. The iconic show was almost a little bit different and we’re glad they didn’t change it!

The film was a war movie, so of course, there were tons of bloody scenes. However, the network told those working on M*A*S*H, the television show, that there just couldn’t be that much blood in on television each week. They weren’t allowed to be as graphic in the television show. This posed a problem.

What Did The Network Propose?

The issue was the operating room. Of course, if you are showing an operating room and surgeries, you will see some graphic scenes and lots of blood. You could pan away from the images, but you still may see something. The network said they should try putting a red tint or a red wash on any film of operating room scenes. They said it was a subtle metaphor for blood, but would be a way to hide a lot of the blood.

The show tried the red tint, but in the end, decided not to do it. They ended up re-shooting scenes and from the point forward, shot the operating room scenes just like any other. They wanted to make the show as realistic as possible but would comply with the network on the blood issue. At first, anyway.

You may notice in the earlier seasons versus the later seasons, that there is more blood in the later years. As the show became more popular and was on the air longer, the network loosened up their grips on the issue of showing blood. In the first few seasons, they couldn’t even show much blood on clothes or sponges!

There Was More Blood As Years Went On

In the later years, they were able to show more bloody scenes and make the blood more realistic looking. If you ever binge-watch the show, see if you can notice this as you move through the seasons of M*A*S*H. Reports are that the cast of M*A*S*H loved to goof around with the fake blood too. The cast would often stick their hand in the fake blood and play pranks with it. Sounds like a messy, fun time!

Can you believe that the show almost had a red filter on all of the operating room scenes? That would have been really weird! We are glad at the network relaxed on this issue. We love M*A*S*H just the way it is. If you enjoyed this article, please SHARE with your friends and family who love M*A*S*H and may not know this fun fact!

Check out a M*A*S*H scene where they are in the operating room: