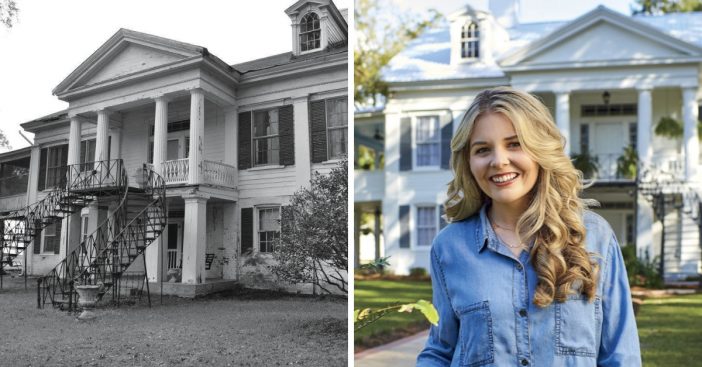 A few years ago, a woman named Sidney Collins Freeman had just completed graduate school and was coming home to be with family and get a break before embarking on a new life journey. However, when she returned home, she realized that her family’s 1832 home was in complete disarray.

The house was in such bad shape that the Alabama Trust for Historic Preservation and the Alabama Historical Commission cited it on their Places in Peril list in 2012. Her parents had moved into a small cottage next door, and Sidney knew she had to take matters into her own hands or no one would. The home was too historic to be forgotten or neglected.

“My mother was ill, and there was discussion of selling it to developers,” Sidney explains, “But we were afraid that it would be demolished and made into an apartment complex or a strip mall… My childhood memories happened here.”

“When I was growing up, my mom, dad, and I lived on the second level, and my great-aunt (a firecracker known to everyone as Pie) lived on the first floor. She made baked goods for everybody in town and fixed lunch for my family each day. She taught me to cook. We were extremely close,” Sidney recalls from her childhood. It’s clear why Sidney is so fond of this house with the loving memories it holds in its walls.

So, just how bad was the house?

She explains it herself. “It didn’t have a shower because they didn’t have them in the 1800s. The electricity was never updated, so we had extension cords running everywhere. The house didn’t have central AC or heat. We lived with window units and gas heaters. We always set up our Christmas tree in the formal parlor, which was freezing, so we would gather there in coats, hats, gloves, and scarves to open presents.”

That’s when Sidney took it upon herself, with the little experience she had with restoring homes, to gather all the funds she had and work with a contractor to revive the 1832 home.

Sidney recalls that the first time she and the contractor got to the house, it looked like a bomb had gone off. They finished all the flooring themselves, which took months, and replaced all of the gas lines, kitchens, baths, ceilings, and more. Mid-way through the project she began dating Jake Freeman, who would then become her husband. By October 2017, not only had the two gotten married, but the house was nearing completion with final touch-ups.

She and Jake now use part of the house as an Airbnb and let guests stay in some of the other bedrooms in the house. “What’s the point of doing all this if you don’t share it?” Sidney asks.

“Getting to live in this house is the greatest dream come true I could have imagined… The work will never be finished, and that’s just fine. The idea that one day my children will wake up on Christmas morning where I did—there’s nothing more special,” says Sidney, who is now expecting a baby.

Check out this similar story below on a beautiful, historic property in Jupiter, FL:

Previous article: Alive And Kicking: Stars Pushing 100 Or More
Next Post: The Home Where Jeff Bezos Started Amazon Is On Sale In Seattle For $1.5 Million