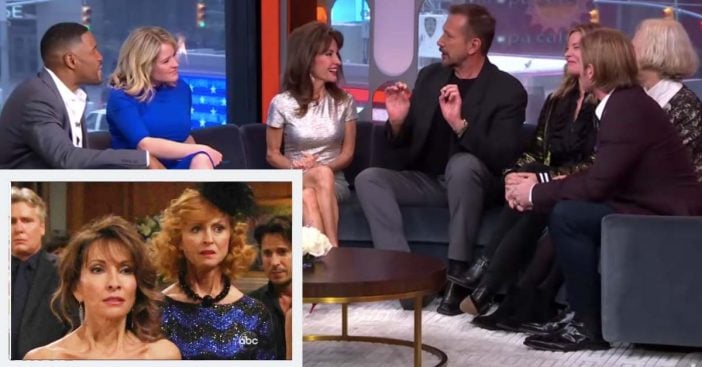 On a segment of ABC’s Strahan & Sara, Susan Lucci, Cady McClain, and more cast members from All My Children reunited. They talked about what it was like filming the soap opera together and what they have been up to since then. The soap opera actually ran for 41 years, so you can imagine how close-knit this cast is.

“The most amazing thing is we’ve all had this ongoing relationship with the audience on a daily basis,” says castmate Cady McClain, “It continues to this day, which is amazing. So grateful for that.” Castmate Susan Lucci says she still gets stopped on the street to this day by fans who recognize her from the show.

Some of the most memorable parts of the show included Lucci’s character’s many husbands, and she was tasked with naming every single one of them on the ABC segment.

“The weddings were always so beautiful,” says Jacob Young, “That’s one thing I remember the most about the show. And I know the fans relate to that too, because they were very epic.”

These co-stars even reprised some of their most memorable and cherished scenes, which probably made fans completely lose it! Being a soap opera, you can bet that they reenacted some of the most dramatic scenes, which was followed by laughs from everyone in the room.

“It’s such a touchstone, it’s such an anchor,” says Jill Larson. It really felt like the gang coming back together after all these years and no one missed a single beat about it. It was like the old days!

All My Children ran from 1970 all the way until 2011 but ran on The Online Network until 2013. The show has earned a slew of awards in its prime, including Daytime Emmy Awards, Primetime Emmy Awards, and a GLAAD Media Award in 2010. With all of this amazing work under these actor’s belts and so many successes, it’s no wonder fans are speculating whether there will be a reboot of All My Children with original cast members.

Lucci actually touched on that last year, saying, “I can tell you first hand there’s definitely an audience that’s there wanting to have it come back on.” She also said that a recreation would be tough with the passing of the show’s creator, but also states that “There a lot of good writers who would be able to carry on. I know it could be done.”

Be sure to SHARE this article if you miss watching All My Children.

Check out the cast reunion on ABC’s Strahan & Sara below: