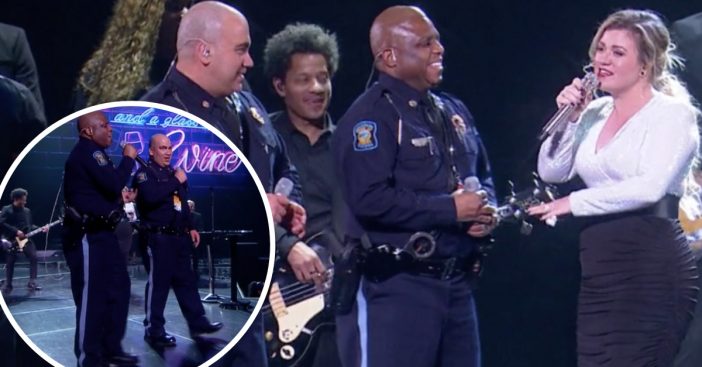 The very first American Idol alum, Kelly Clarkson, called upon the Kansas Capitol Police to come and sing a song of their own on stage. The concert took place in Kansas City, Missouri last week when she invited troopers LaMont Jackson and Mike Pagel up on stage with her during her “A Minute and a Glass of Wine” tour.

These specific officers are no ordinary officers either. They actually went viral for teaming up to create and post a karaoke video of them in their patrol car. Clarkson actually played a clip of their viral video before inviting them up!

LaMont Jackson, in particular, had quite the stage presence and soul during the performance and put everything he has into it. Clarkson humorously quipped, “I’m your drunk background singer,” as she swayed and sung with a glass of red wine in her hand. Keeping it classy and real!

Pagel, who runs the police’s social media feeds, spoke about the opportunity to literally perform not only for Kelly Clarkson but also for a huge audience that consisted of people watching from home as well. “I don’t know what made me [more] nervous, my first traffic stop or going out on stage in front of 15,000 plus people… And that by far was the experience right there that made me super nervous. It was awesome though and Kelly was great to us.”

The two officers sand the song “Stand by Me” and the whole audience sang along as well, because, who doesn’t know that song, right? Everyone was having a blast, not just the police officers, and it was truly a moment of unity, love, and a genuinely good time!

“They’re sacrificing their lives every day for y’all, okay? Give it up,” Clarkson begins before the officers take the stage with song, “I’ve had cops in my family and everything and people don’t realize, like, it’s a scary thing. Like, to send your loved ones out there to possibly really, horrible situations.” The whole crowd agrees and shows appreciation for the men in blue with a round of applause and screams.

The video, which was broadcasted live on Facebook along with the rest of the tour, has garnered almost 150,000 views. “Thank you Kelly for always bringing regular people on the stage with you. You are so down to Earth. Thank you officers for keeping us safe!” one Facebook commenter said in response.

“‪It’s not a secret anymore . Words can’t even explain how much fun Officer’s Jackson and Pagel had last night at the Sprint Center #Wow,” the Kansas Capitol Police wrote in a Facebook post following the show.

Be sure to SHARE this article if you loved Kelly Clarkson supporting local law enforcement!

Check out the full clip of the performance below:

Previous article: Heart Announce ‘Love Alive’ Tour, With Joan Jett And Sheryl Crow As Openers
Next Post: There Is A Major Clue About The Upcoming ‘NCIS: LA’ Wedding And It Is Not Good