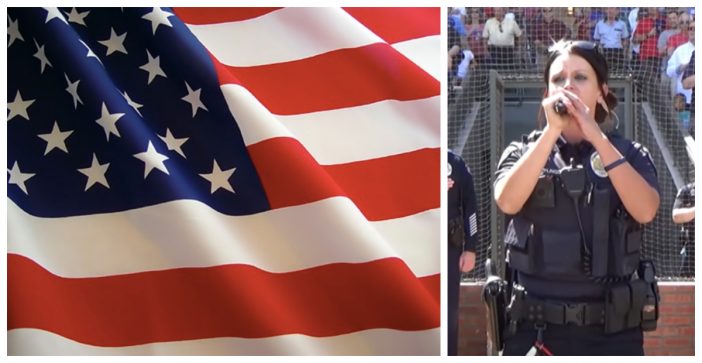 She performed to a crowd of thousands and stood proudly as she sang. The video of the performance was posted by the Surprise Police Department to honor her performance and dedication to her city and community.

Everyone in the crowd, including the surrounding fellow police officers, gave total attention and respect to the singer. Hand over heart, hats off, and standing tall, everyone seemed to be captivated by the police officer with a secret talent. Even despite the faulty microphone technicalities at the beginning, she performed one heck of a show.

People all over the Internet are praising this young officer not only for serving fearlessly in her line of duty, but also for her impeccable vocal talent. Additionally, many commented on how they loved that the song was kept to a traditional rendition.

This was implying that many pop stars who are chosen to sing the National Anthem put their own twist on the song and ruin it.

The National Anthem, or The Star-Spangled Banner, originated back in 1773 as an instrumental. The lyrics were finally produced in 1814 from a man by the name of Francis Scott Key. The lyrics were produced after he witnessed the attack on Fort McHenry by the British ships of the Royal Navy in Baltimore Harbor. This was otherwise known as the ‘War of 1812’.  Key was inspired by the American flag waving with 15 stars and 15 stripes at the time upon U.S. victory. Thus, the National Anthem was born.

The Star-Spangled Banner was first used by the United States Navy in 1889, which has alleged continuous use since then. Several years later, the National Anthem is a nationally recognized song that is used traditionally before most sports games or other patriotic events.

Be sure to SHARE this article if you loved this officer’s rendition!