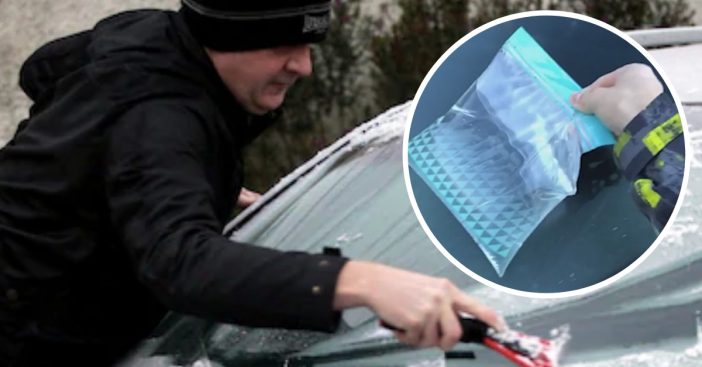 A man named Daniel Harris, who lives in the UK, recently shared a video on Facebook with the best and simplest way to help de-ice your car’s windscreen. This will certainly come in handy with the polar vortex among us and most of the midwest and northeast dealing with up to -45-degree wind chill temperatures.

The hack of de-icing the car entails only a plastic bag and warm water. All you need to do is fill the bag with the water and gently slide it across the windscreen, which will then help melt the ice on your windscreen. The results have truly left people mindblown!

The caption accompanying the video was a message from Daniel, saying, “Hot water in a food bag and bam you’ve got a de icer and a hand warmer. Works a treat, and it’s fast!” He also explains that by using hot water instead of an ice scraper, he instantly lowers the risk of damaging his windscreen.

“Why have we never done this?” one person wrote in response. Another commenter responded, “I’ll need to do this. My hands were Baltic spraying de-icer because the can was that cold.”

“The de-icer cans are so cold in the morning and this way it keeps you nice and toasty,” Daniel continues to explain. He also responded to comments of doubt by saying, “Oh and yes, it was ice, not condensation. I know it looks it but try it and you won’t be disappointed.”

With this innovative, even revolutionary idea, people will no longer need to get out cans of de-icer, their ice scraper, or spend money on either product ever again. Many people have already tested out the method to see if it worked or not, and everyone was pleasantly surprised!

One commenter claimed that she tried it on her husband’s car and it successfully worked!

Lisa from Facebook said that the method when performed “true to word” is extremely successful.

One commenter said that she just throws a jug of warm water over hers and it’s finished within seconds. Another method that could be used to speed up the process! Has anyone else tried this?

Another commenter said that he used to do this 30 years ago. Guess this is actually a 30-year-old method!

Be sure to SHARE this article to spread awareness about this awesome de-icing trick.

Check out the full video of the de-icing method below: