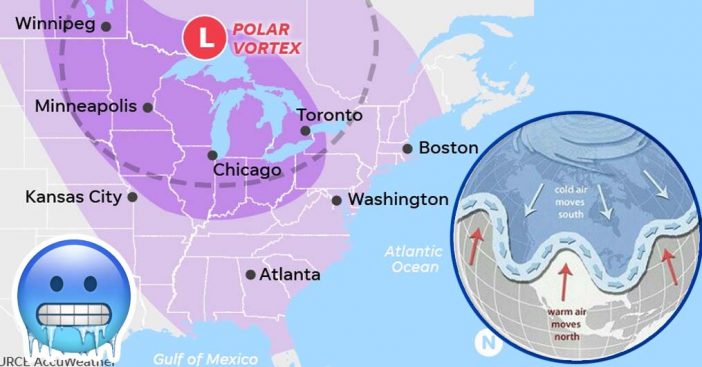 Just a few days ago we reported that brutally cold weather was making its way into the United States, bringing bone-chilling temperatures across the midwest and northeast. Well, bone-chilling is an understatement for more than 20 U.S. cities, which will be experiencing temperatures of at least -30, and in some places, -55.

In total, 35 U.S. cities will be impacted by the frigid cold of the polar vortex. Chicago and Minneapolis are among the many that are not forecast to see temperatures above freezing for at least the next 10 days, With this arctic blast of air impacting the U.S., it makes for the coldest “high” temperature on record.

We've compiled some resources to help you prepare for what could be our coldest day in years. https://t.co/6hPJdrLHKm pic.twitter.com/Ij1clsjofG

With this polar vortex in sight, it is reported that two waves will be coming through, the second one extending all the way down to Florida with below-freezing temperatures. With this being said, nearly a quarter of the U.S. population will be experiencing below-freezing temperatures. The Chicago National Weather Service has already issued multiple statements on the situation.

“Record-breaking and potentially historic outbreak of cold still appears to be in the offing for the middle of next week,” they say, “Greater than normal degree of forecast uncertainty in temperatures, due in large part to models showing all-time records being broken and in some cases shattered.”

‘Polar Vortex’ Will Have Nearly 90 Percent Of US Below-Freezing https://t.co/eaVWht2PSk pic.twitter.com/gKGwNb1VRU

Chicago’s National Weather Service also tweeted out to “ensure the car, home, and your family are ready,” in light of the snow that will be accompanying these horribly freezing wind chill temperatures in some areas. Some places, like Wisconsin, have even declared a State of Emergency.

“Due to severe winter weather, I have declared a State of Emergency throughout the State of Wisconsin. I want to make sure all state assets are available, including the Wisconsin National Guard if needed, to help communities across the state and keep people warm and safe,” says Governor Tony Evers of Wisconsin.

Due to severe winter weather, I have declared a State of Emergency throughout the State of Wisconsin. I want to make sure all state assets are available, including the Wisconsin National Guard if needed, to help communities across the state and keep people warm and safe. pic.twitter.com/U9fy4FPygh

Rich Otto, a meteorologist with the National Weather Service, spoke to NPR about the polar vortex and how it’s likely to affect the U.S.

“The other thing to consider with the cold temperatures are going to be the winds, and so the winds in combination with the cold temperatures are going to allow for some dangerously cold wind chills, values as cold as minus 30 to minus 50 degrees in a couple locations, and even colder as you get farther north, into parts of Minnesota, where some of those wind chills could get down to minus 60,” he adds, “These are probably some of the coldest temperatures that the area has seen, parts of the upper Midwest, since the mid-’90s.”

Be sure to SHARE this article with your friends and family to prepare for the cold blast that will be coming through on Wednesday and Thursday! Stay warm and safe.

Check out the video below on the polar vortex explained in 2 minutes: