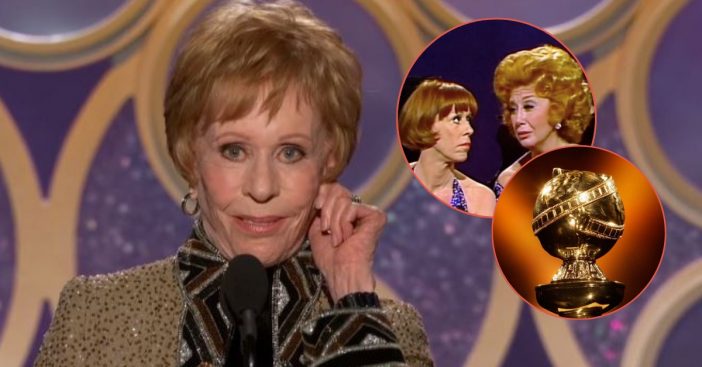 The 2019 Golden Globes took place with several big names and films took home the “gold” for their outstanding work throughout the course of 2018. One of the awards given out last night was the very first Carol Burnett Award for Lifetime Achievement in Television, which was obviously awarded to Carol Burnett herself.

According to the Golden Globes, the award is meant to go to someone who “has made outstanding contributions to television on or off the screen.” The 85-year-old entertainer accepted her award with a very touching, nostalgic speech. She reminisced about being younger, everything being 100% live, and thinking that the younger generation today is missing out on some of the best times.

"We’ve been granted a gift, a canvas to paint with our talent." – Carol Burnett pic.twitter.com/jOdFzyZhAU

“Oh, Steve Carell, all I can say is he is as nice as he is talented, and I thank you so much. Where are you? Thank you, Steve. Thank you. And my thanks to the Hollywood Foreign Press Association,” Burnett began, thanking Steve Carell who introduced Burnett to her award and welcomed her onstage.

“I’ve been really gobsmacked by this. Does this mean I get to accept it every year? But, do you know, my first love growing up was in the movies. I’d see as many as six to eight films a week with my grandmother who raised me, and then later, when I was a teenager, we got our first television set, and then I had a new love. But regardless of the medium, what fascinated me was the way the stars on the screen could make people laugh or cry or sometimes both, and I wished and I hoped that maybe, just maybe, someday I could have the chance to do the same thing. Well, those childhood dreams came true sometimes on the big screen but primarily on television, on a comedy variety show that half a century later still connects with people in a way that makes me very proud.”

A look back at the incomparable Carol Burnett's career. #GoldenGlobes pic.twitter.com/xrWUSTPBBm

“Sometimes I catch myself daydreaming about being young again and doing it all over, and then I bring myself up short when I realize how incredibly fortunate I was to be there at the right time because, what we did then, it couldn’t be done today. The cost alone would be prohibitive: 28 piece live orchestra, no synthesizers, 12 dancers, an average of 65 costumes a week, and there’s the brilliance of our regular rep players: Harvey Korman, Vicki Lawrence, Lyle Waggonner, Tim Conway, plus two guest stars every week. I’m so grateful for the chemistry that we had with each other.

And there was great chemistry behind the camera too with our crew, our producer, our director, our choreographer, our writers, the cue card guys. We all became one happy family for 11 joy filled years. And nothing like our show and, I might add, other variety shows at the time could ever see the light of day today because, the networks, they just wouldn’t spend the money and because there are so many cable competitors. They are not going to take a chance. And it’s sad to say today’s audiences might never know what they are missing. So here’s to reruns and YouTube. (Laughter)”