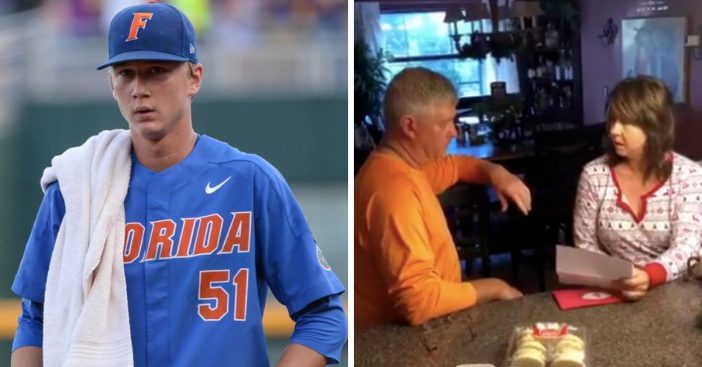 Brady Singer, a pitcher in the Kansas City Royals organization, posted a video on Twitter that soon went viral after he recorded his parents opening a gift from him on Christmas Day. In the video, his mother reads off a letter from her son, detailing that he had paid off their mortgage in exchange for all that they’ve done for him.

Both parents don’t even know what to say as they just stare at the letter in awe. Mom gets all choked up as she attempts to finish reading the letter aloud. In the letter, Singer includes that he had paid off all their debt as well and they can spend the rest of the leftover money on themselves.

“Today is very special to my heart. To give back to the two people who have given up everything to support my brother and I. I can’t thank them enough. Love you Mom and Dad,” Singer’s post on Twitter reads.

As mentioned before, Singer is a pitcher in the Kansas City Royals organization, and for years his parents helped shape his dream into a reality. He mentions all the “money they both spent on traveling, the gear, hotel, food and all those Gatorades he drank,” as a continuous effort to give their son the best life they possibly could.

The video showed Singer’s mother staring at the father in complete disbelief. The professional baseball player went above and beyond to show his biggest supporters in life just how much he appreciates them. He had signed to the Royals earlier this year for $4.25 million.

“Thank you for everything you’ve done to help me reach my dreams,” his letter included, “There’s absolutely no way I could have done all this by myself. Both of you constantly took off of work and spent every dime you made just to put a smile on my face. My smile and appreciation for both of you has never stopped and it never will.”

As you can imagine, the Internet is blowing up about the incredible act of kindness.

and that’s how it’s supposed to be done “world”. Give back to those that would never question giving to you! 👨‍👩‍👧‍👦

“Give back to those that would never question giving to you.” A quote to live by.

We’d all pay off our parents’ mortgage and debt if we could afford to.

Mr. And Mrs. Singer you two have raised a very fine young man the right way. Sit back and be very proud not of his accomplishments but of the man he has become. This is showing proof that if raised right kids will end up doing the right thing.

We are certain that the Singers have raised their son to be a true class act!

Please SHARE this article to spread this act of kindness around! We could all use a beautiful story like this today.

Check out the full video below:

Today is very special to my heart. To give back to the two people who have given up everything to support my brother and I. I can’t thank them enough. Love you Mom and Dad pic.twitter.com/AFHi2Xma0c