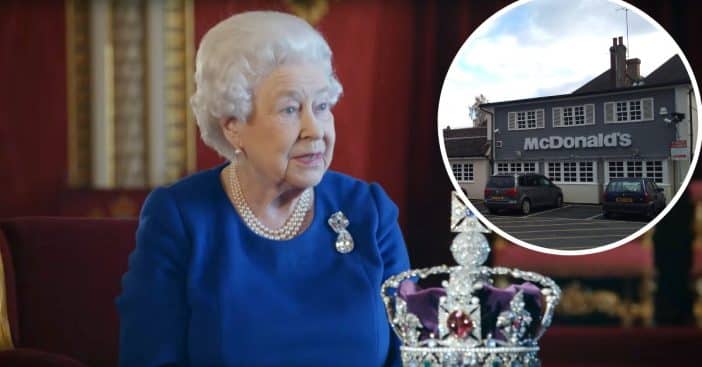 When Queen Elizabeth II was alive, she acquired many properties under the Crown Estate. Some of her investments were fairly normal, including hotels, castles, and race courses. However, there were some strange things that she owned and made her own, such as one McDonald’s restaurant.

If you live in or have ever visited the U.K., there is a more luxurious McDonald’s located at Oxfordshire’s Banbury Gateway Shopping Park. Since it was owned by the Queen, the decor inside is a little different. It has leather sofas, laminate floors, and even white Eames chairs. Everything feels a bit fancier.

It also has the greatest technology, including tablets at the tables and digital menu boards. There’s also table service, meaning that you pay and order, and then they bring the food right out to you.

It hasn’t been shared what the Queen would eat at McDonald’s but we do know her normal eating habits from the Royal chefs. Reportedly, she loved to have biscuits and Earl Grey tea in the morning. For lunch, it was usually fish and vegetables followed by an afternoon tea with cake and more tea. For dinner, she often had meat and more vegetables.

The Queen even had a favorite cocktail. She loved lemon-twisted gin and Dubonnet. As many flock to the Royal residences to pay tribute to Queen Elizabeth II, you may want to stop by her McDonald’s if you’re in the area and have a Big Mac in her honor.

Click for next Article
Previous article: Operation London Bridge: When Is The Queen’s Funeral And King Charles’ Coronation?
Next Post: Winston Churchill Met The Queen When She Was Just Two Years Old