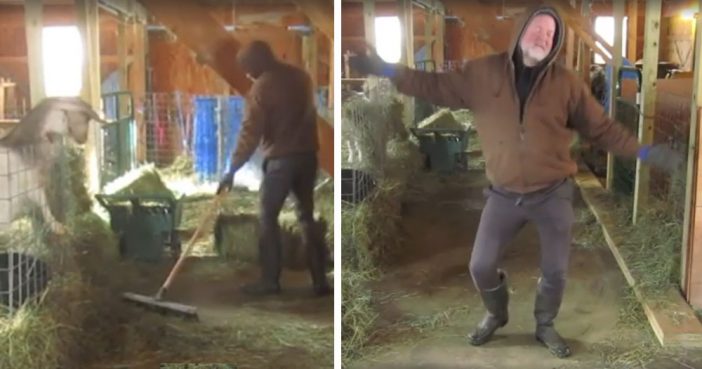 This story was originally written by Jenae Sitzes for countryliving.

A New York farmer is spreading smiles around the world thanks to a viral video of his impressive dance moves. When Jay Lavery, a 50-year-old farmer from upstate New York, uploaded a video of himself dancing to Sia’s hit “Cheap Thrills” on Dec. 30, he intended only to entertain his close friends on Facebook. He didn’t anticipate that the world would also be captivated by his moves.

In the video, you initially see Jay going about his daily chores at the Permaculture Inn farm in Sharon Springs, NY, sweeping hay into a corner as goats stand idly by in their pens. But when the music comes on, Lavery begins to nod his head to the beat. Soon, the broom is on the ground, and Jay is full-on grooving to the sounds of Sia, his goats a captive audience.

But it’s more than just his slick moves that have attracted the support of the internet. In his caption on the video, Jay shared that 15 years ago, he suffered a traumatic back injury and underwent a series of surgeries, including a discectomy and a spinal fusion.

Since then, he has experienced never-ending back pain. But rather than let his physical injuries hold him back, Jay has embraced an active lifestyle that includes dancing, yoga, and meditation so that he can keep moving forward.

“I hope this can inspire anyone to move in spite of pain and I hope this puts a smile on your face for the New Year,” Jay wrote on his post.

Previous article: Why Robin Williams’ Son Hangs Out Behind Bars
Next Post: Most Lewd-Sounding Town Names In Each State Revealed