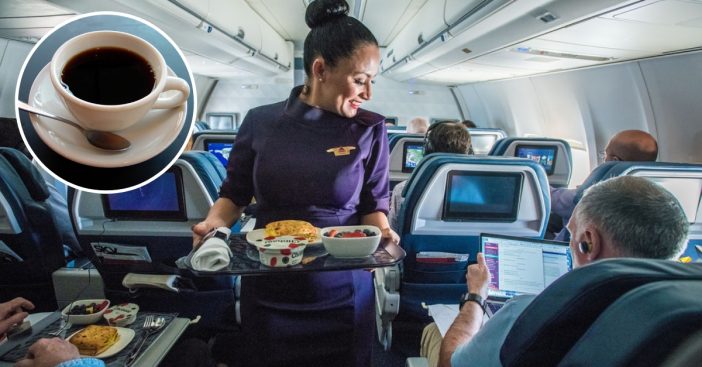 Next time a flight attendant offers you a hot coffee or tea on your flight, it is probably best to decline. A new study found that most coffee and teas offered on airlines are filled with disease-causing pathogens. It comes from the tap water on an airline.

There have been no public reports of passengers getting sick from the coffee or tea on a flight, but that doesn’t mean you shouldn’t avoid it. It is usually made from the airline tap water, which is only as clean as the hoses and tanks used to transport the water. These are not always cleaned and maintained properly.

What Are All The Risks?

The current Airline Drinking Water Rule that is regulated by the EPA, FDA, and FAA requires disinfection and flushing one to four times a year. This rule has not been updated since 2009. Flushing the tanks a few times per year really isn’t enough to rid the water of dangerous bacteria.

What Do Airlines Say?

When the study results came out, several airlines responded to the accusations. Delta claims that they disinfect their tanks four times per year and taps and surfaces are cleaned between flights. They also require their Delta employees to attend a “drinking water service training” every year.

American Airlines claims they regularly test and disinfect their catering carts, trucks, and water tanks. Employees claim that flight attendants will not drink the water, coffee, or tea on flights and say it is dirty.

But, doesn’t boiling water kill germs? Not always. If the water isn’t heated enough, it could still be contaminated. If the flight attendants are rushed, the water might not get heated up enough for all of the bacteria to go away. Do you get coffee on airplanes?

Another Wall Street Journal study found salmonella, Staphylococcus bacteria, and insect eggs in airplane water. How gross is that? Just go ahead and splurge and get the bottled water or bottled beverages, especially if you have a compromised immune system.

What do you think about these studies and claims? Will you only drink bottled beverages on planes now? If you found this article informative, please SHARE with all of your friends and family who travel on airplanes often!

Previous article: Tim Allen Honors Veterans In Special Christmas ‘Last Man Standing’ Episode
Next Post: You Should Be Replacing Your Pillows Way More Often Than You Actually Are