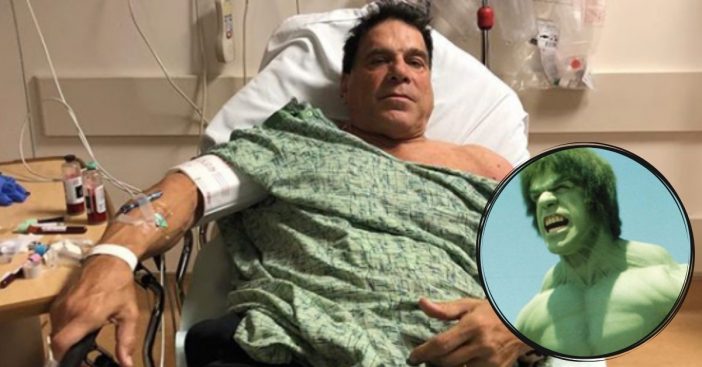 Lou Ferrigno, 67, has reportedly been hospitalized after a pneumonia vaccination went wrong. He shared the news via his social media accounts, revealing that he was improperly administered a pneumonia vaccine.

“I’ll be ok but it’s important that you keep an eye on who’s giving the shot and make sure they not only swab the spot correctly but that you watch the needle come out of the package,” says Ferrigno in his Twitter post. He is currently recovering.

Went in for a pneumonia shot and landed up here with fluid in my bicep.

I’ll be ok but it’s important that you keep an eye on who’s giving the shot and make sure they not only swab the spot correctly but that you watch the needle come out of the package. pic.twitter.com/ccHiDrY1Po

It is unclear what type of vaccine was given to Ferrigno, but there are two specific types of vaccines that are used to stave off pneumonia, called PCV13 and PPSV23, for adults over the age of 65. Senior citizens are encouraged to receive these vaccinations to avoid contracting infections from pneumococcal diseases like meningitis.

The Centers for Disease Control and Prevention state that both vaccinations do cause mild side effects in some patients, but they often go away on their own. While Ferrigno tells his fans to be self-aware when receiving shots, the CDC claims that the pneumonia vaccines are the safest and most effective in history.

Lou Ferrigno is best-known for his role as the Hulk in the Marvel TV series The Incredible Hulk, which aired in 1977. Ferrigno has recently picked up roles in films like The Avengers (2012), Star Trek Continues (2014), and Enter the Fire (2018). According to his IMDb, he has several completed films and some in pre-production and post-production for 2019 and even 2020.

Before dedicating his life to acting, Ferrigno was known as a bodybuilder but officially retired from that career in the ’90s. He co-founded his family’s fitness program called Ferrigno Fit with his daughter, Shanna. You could say he’s doing pretty well these days!

Ferrigno has not commented on his recovery thus far but has posted on his Instagram account since being in the hospital. He posted a few photos hanging out with some friends at Smash Global Sports Entertainment. It seems as though he’s recovering very well!

In his initial hospital post (which was also shared on Instagram) he also posted a series of humorous hashtags that said, “#neveradullmoment #tips #shots #hospitalvisit #louferrigno #illbeok”. We’re definitely glad he’s back to feeling himself again!

Do you remember Lou Ferrigno in the 1977 Incredible Hulk TV Series? Will he always be The Hulk to you?

Be sure to SHARE this article to spread the news about his faulty vaccination; it might save a life!

Check out the video below of a 20-minute documentary on Lou Ferrigno and his experience with The Incredible Hulk:

Previous article: Dunkin’ Donuts Is Giving Away $120,000 In Free Gift Cards Before Christmas
Next Post: The Christmas Season Through The Years — What Was Popular The Year You Were Born?