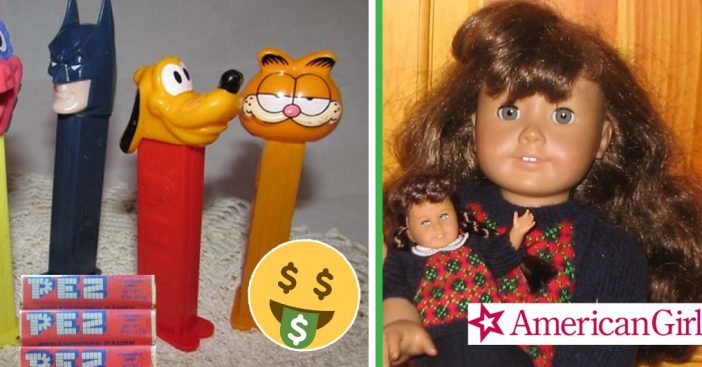 We all have some toys from our childhood that were once extremely popular, but in recent years have been discontinued or even revamped and put on the market again. No matter if you were a proud owner of an American Girl Doll or a Star Wars action figure, a lot of these items could rack up some insane value.

You might want to run to your childhood home, your basement, or your attic and see if you have any of these items. They could be worth thousands of dollars!

Garbage Pail Kids Cards were not typically a hit with the parents, but kids loved them. How much your card is worth depends on which card it is, when it was made, and the condition it’s in. One card sold for $300 on eBay and a bundle of them from 1985 is going for $4,000.

If some Pokémon cards are rare and kept in great conditions, they could go for thousands of dollars.

Star Wars collectibles are known to sell for a lot of money and collectors will pay far more than they need to in order to get their hands on what they want. In 2015, a Luke Skywalker Action figure released in 1978 was sold for $25,000.

Many people buy, use, and keep their PEZ dispensers over the years because they are worth so much! Collectors will pay even more. A 1982 PEZ dispenser recently sold on eBay for a whopping $32,000. You’ve got some solid earnings if you have a rare PEZ dispenser!

And, no, we aren’t talking about the newest Millennial Monopoly! The original hand-drawn version by Charles Darrow (1933) sold for $146,500 in 2011. Any original versions from the 1930s or limited edition versions can sell for tons!

Page Page 1 of 4
Previous article: Man Loses Wallet At Airport, Then Gets It Back In The Mail With Extra Cash Inside
Next Post: This School Is Now Banning Kids From Wearing Expensive Designer Winter Coats