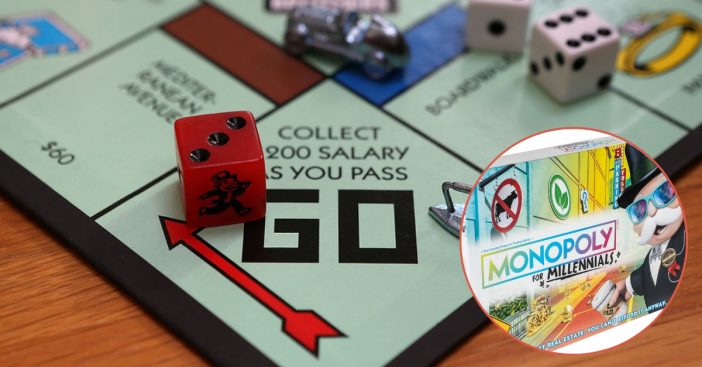 Hasbro has just released a ‘Monopoly for Millennials’ game and it’s depicting some very real stereotypes for the millennial generation that is apparently bothersome to many. The front of the board game features Mr. Monopoly wearing a medal, holding a coffee, wearing headphones, and taking a ‘selfie’.

“Forget real estate. You can’t afford it anyway,” is the slogan on the cover of the board game. Many people are taking to social media to express how they feel towards these jabs at the millennial generation, while others think it’s pretty amusing how on point it is.

Hasbro released a statement upon the backlash they received for releasing the game. The statement read:

“We created Monopoly for Millennials to provide fans with a lighthearted game that allows millennials to take a break from real life and laugh at the relatable experiences and labels that can sometimes be placed on them… With many of us being millennials ourselves, we understand the seemingly endless struggles and silly generalizations that young millennials can face (and we can’t even!).”

As we said before, many people aren’t happy, mostly millennials that feel attacked or offended by the stereotypes.

I swear millennial monopoly is the most condescending game ever created. We’re broke, it’s not our fault, leave us alone smh @Hasbro pic.twitter.com/5vdmRQJOOv

One Twitter user called the game ‘the most condescending game ever created’. She also stated that it’s not the millennial’s faults that they’re broke and to leave them alone. Yikes.

Another Twitter user got down and dirty with some hard-hitting opinions, stating that Hasbro should donate the proceeds from the product to student debt relief, claiming that as a reason behind why millennials can’t afford real estate.

Presumably because millennials are too lazy for a full game of monopoly pic.twitter.com/3sZpcyfop0

One Twitter user had a much different perspective on the game. He mentioned that there are noticeably fewer spaces on the board, but made the joke that it was “presumably because millennials are too lazy for a full game of monopoly.”

And finally, this Twitter user took to social media to express his amusement over the game and how millennials are freaking out about the game.

Despite the backlash that the game has received from millennials, Hasbro has created a winner. The game goes for $19.82 and is available exclusively at Walmart. It’s so popular that it’s already been listed as ‘out of stock’ on Walmart’s website, so it’s clear that no matter who’s buying it, many people are giving it a try and seeing what the hype is about!

We Just Launched Our New Classic Arcade! Click Below To Check It Out

Previous article: Bob Barker Back In The Hospital For Second Time In Two Months
Next Post: ‘Kit Homes’ From Sears Catalogs In The Early 1900s Are Being Sold For Millions