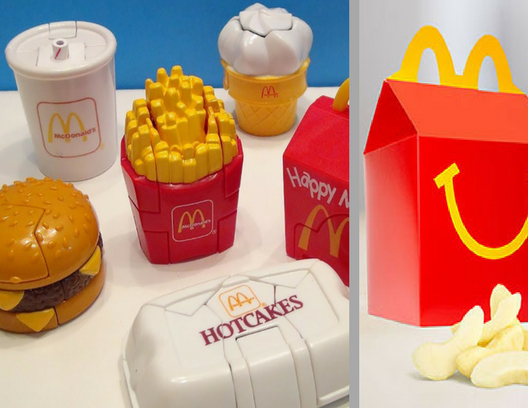 Websites dedicated to buying and selling Happy Meal toys indicate that from Barbie to Cabbage Patch Kids, you could cash in on your old trinkets. A vintage set of pens in the shape of your favorite Mickey D’s characters, for instance, is selling for $99, and a Disney-themed toy set costs $125. Even the boxes are in high demand.

Or, if you happen to have a full set of Minions lying around, they’re going for a cool $360, according to AOL. Sounds like a pretty good excuse to clean out those closets. We’ll look at the history of the free and cheap toys distributed by McDonald’s that are worth a lot more money today.

Everyone enjoys the merging of popular television series and McDonald’s toys. This particular Happy Meal toy consisted of four Muppet Babies toys that all children at the time wanted to get their hands on. The mystery of the Happy Meal toy made it a difficult to task to get all four but the collectors that did are selling them on eBay years later. All four toys are going for over $50 together. The price range is smaller than most of the other toys on this list but the fact that these toys are so basic make it nearly impossible to imagine the 50 bucks is needed to acquire them. Kermit the Frog on a skateboard is definitely worth it.

Snoopy is the beloved dog of Charlie Brown in the legendary Peanuts cartoons and comics. The 50th Anniversary festivities saw McDonald’s make special toys commemorating the accomplishment. There were a select few toys made to look like parade floats featuring Snoopy as a way of celebrating the big moment. The complete collection is going for $100 online if you were lucky enough to get them all in your Happy Meals. Not only is it a rare collection to find but the designs are actually pretty cool. Peanuts fans will shell out the big bucks to show their love of Snoopy with this expensive old McDonald’s toy set.

The legendary Mr. Potato Head was one of the more popular toys in past decades and McDonald’s used the brand power to create an exclusive toy for their Happy Meals. Potato Head Kids were given away in the Happy Meals with various designs in 1987. There were twelve different designs making it that much more impossible to capture them through the Happy Meals unless you ate burgers every day. The complete set is going for $75 online and is very rare to find. Most of the online sellers have a variation of the twelve but very few have all of them.