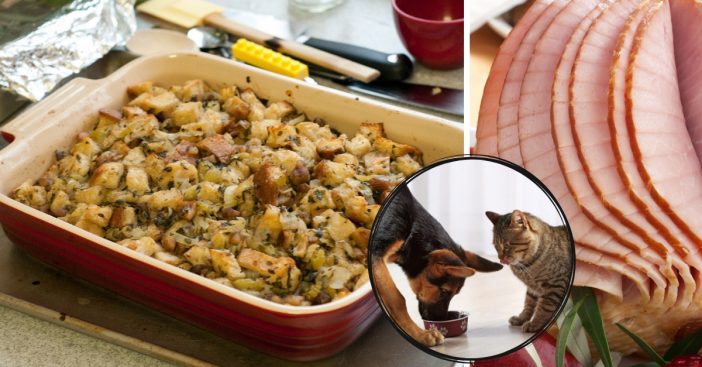 Only recently have reports flooded been released stating which foods are OK to feed to your four-legged friends. It’s pretty second-nature to some people to feed the scraps of food from the table to their curious and hungry furry companion. However, studies have shown that there are some foods you really shouldn’t feed to your pets, and chocolate isn’t the only no-no food!

In light of Thanksgiving Day which is just around the corner, here are 10 Thanksgiving foods you shouldn’t feed to your pets. Some of them might surprise you!

This might not be super obvious to some pet owners and the first food item they often reach for when feeding their pet table scraps is the turkey. The reason behind this is because your turkey is often smothered in butter, garlic, or other seasonings, which can be very toxic for your pet. However, if the meat is totally boneless, plain, and well-cooked, it may be fine for your pet to nibble on a very small portion.

Pet insurance carrier Pets Best says that pork products, including ham, can lead to pancreatitis, vomiting, and diarrhea in pets. Even the smallest portions of this food item can cause obesity in smaller dogs and cats.

The reason stuffing is out of the question for pets is because stuffing often contains foods that are extremely harmful to animals’ systems. This includes foods like Wild mushrooms, grapes, raisins, and “especially onions,” according to Sadie Cornelius, Marketing Director for Canine Journal.

If you’re thinking of feeding your pet a little piece of pumpkin pie, think again. If they want to try plain, canned pumpkin, that’s fine, according to People. Pumpkin is great with aiding proper digestion. However, pumpkin pie is loaded with additional spices and condensed milk, which can make your pet have a very upset stomach.