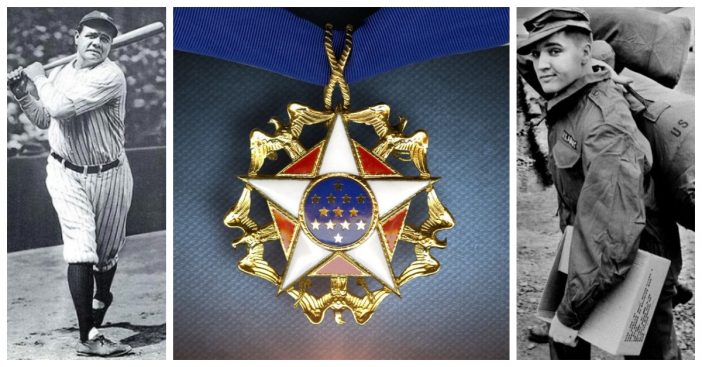 Babe Ruth is being honored as one of America’s biggest names, especially in sports history. When he began his sports career as a left-handed pitcher for the Boston Red Sox, a team that is fiercely dominating to this day, little did he know that he would become a household name in America several years after his death in 1948.

Not only is he a household name and American staple, but he is also a huge inspiration for athletes everywhere, especially aspiring baseball players.

The other recipients of this award are incredibly important as well. Miriam Adelson established the Adelson Medical Research Foundation, which supports research to prevent, reduce, or eliminate disabling and life-threatening illness, alongside her husband Sheldon. In correlation with the establishment of this foundation, she also practices internal and emergency medicine.

Orrin Hatch is one of the longest-serving senators in United States history and represented the state of Utah for more than 41 years. He has also advocated for global freedom since the start of his political career.

Alan Page, as previously mentioned, is a former Minnesota Vikings defensive tackle, but was also the very first African-American judge on the state’s Supreme Court in 1992. He served for more than 20 years and his Page Education Foundation has since provided scholarships to almost 7,000 students.

Antonin Scalia can be remembered as one of the greatest Supreme Court Justices of our time. According to the White House website, Scalia can be described as someone who was “rooted in America’s founding principles, legal heritage, and constitutional obligations.”

Roger Staubach was a former Dallas Cowboys quarterback who played 11 seasons in the NFL. He also served his time in the Vietnam War. Following that, he was able to dedicate some time and effort to charitable causes such as Allies in Service, an organization that is dedicated to supporting military families.

Please SHARE this article to spread the news about these wonderful Medal of Freedom honorees! Check out the video below of Elvis Presley’s army discharge and homecoming.

Page 2 of 2Page
Previous article: The 5-Second-Rule Doesn’t Actually Exist When You Drop Your Food
Next Post: Aerosmith Guitarist Joe Perry Collapses And Is Rushed To The Hospital After Recent Performance