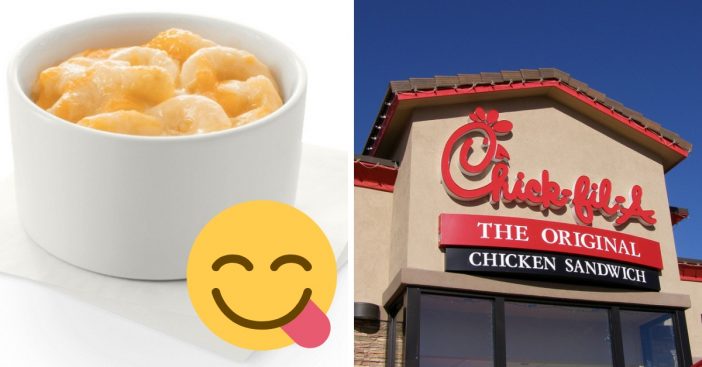 Certain Chick-fil-A locations are reportedly giving their customers the chance to order mac and cheese. Chick-fil-A was founded in Georgia and is known for their delicious chicken. They also offer a few other famous Southern foods and drinks like biscuits and sweet tea. It seems like they are adding another Southern favorite to their menu with mac and cheese.

However, while it does show up on their website, it appears that not all locations are serving the cheesy goodness just yet. They started testing the new side all the way back in 2017. It has now been added as a side in certain restaurants including ones in North Carolina, Texas, and Maryland.

People have also started to share photos and reviews on social media. Chick-fil-A even responded to some of the posts, so you know that this new side is actually coming to menus. No word yet on where it will land next or if it will be a permanent menu item. We can only hope! People on social media who were lucky enough to try it are raving about the mac and cheese!

Here are some of the recent tweets:

Everyone who doesn’t live near a full serve @ChickfilA is gonna flip when they try the mac and cheese. It’s soooooo good 🤤🤤🤤

Have you been able to try Chick-fil-A mac and cheese yet? If you did, what did you think about it? If you haven’t yet, are you dying to get your hands on it? If you want to stay up to date on all the new menu items and news from Chick-fil-A, they have a newsletter called the “Chicken Wire” and you can subscribe on their website.

Chick-fil-A is also testing out another new menu item in select restaurants called the Frosted Key Lime. It is a frozen drink made with their vanilla ice cream, lemonade, and sugar-free lime flavoring. It will also include spirulina and turmeric so it gets that lovely green shade. It is being tested in Austin, Texas restaurants and if it receives good feedback, it may become available everywhere soon.

We will keep you posted if there is an official statement from Chick-fil-A on their plans to move forward with their mac and cheese or the Frosted Key Lime. They both sound so good! We can’t wait to try them!

If you enjoyed this article, please SHARE with all of your friends who love Chick-fil-A and mac and cheese! They will be so happy to hear the news! Hopefully, a location near you and your friends has it!

Previous article: Only 2% Of People Can Solve These 6 Riddles. Can You?
Next Post: Hallmark Is Creating Their Own Radio Station, So You Can Listen To Christmas Music ASAP