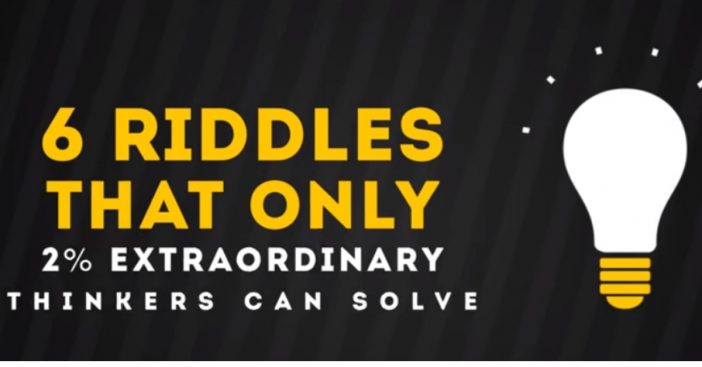 Here are some ridiculously hard riddles. See if you can solve any of these!

1. Can you correct this flawed equation without changing the numbers around at all? 8 + 8 = 91.

ANSWER: Think outside the box for this one. If you flip the equation upside down, you have your answer! It becomes 16 = 8 + 8. Pretty clever, right? Did you get it right?

2. If someone fell into a 100 foot well and would climb up 10 feet every single day, but fell back down 6 feet every night while sleeping… how many days would it take for them to get out?

ANSWER: Did you figure it out yet? It would take 24 days! Does your brain hurt yet?

3. A man was kidnapped and put in a room with nothing inside except a pipe sticking out of the floor with a ping pong ball at the bottom. He had to get the ping pong ball to escape. How did he do it?

ANSWER: With nothing else to get the ping-pong ball out, the man peed into the pipe, which allowed the ping pong ball to float to the top where he could grab it. Kind of gross, but clever!

4. A woman is trying to poison her husband to receive his wealth. He knows about the scheme so he only eats the same foods as her. However, one day she offers him an apple. He says he will eat it if she cuts it down the middle and eats the other half. The apple poisoned him but she remains healthy. How did she do it?

Page Page 1 of 2
Previous article: Did You Know Costco Sells A Giant Pumpkin Pie For Only $6?
Next Post: Chick-Fil-A Is Testing Out Mac And Cheese And We Are Ready