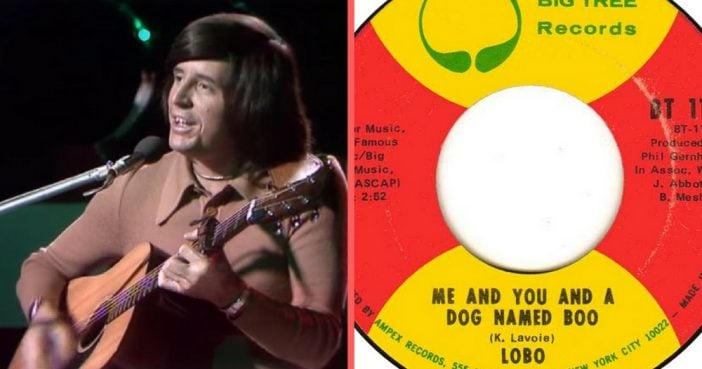 “Me and You and a Dog Named Boo” is the 1971 debut single by Lobo. Written by Lobo under his real name Kent LaVoie, it appears on the Introducing Lobo album. The single peaked at number five on the Billboard Hot 100 and was the first of his four number one on the Easy Listening chart, where it had a two-week stay at number one in May 1971.

This song is about two hippies and a dog taking a cross-country road trip in an old car that runs poorly. The protagonists of the song get mired in the Georgia clay, steal food from a farmer and work to pay it off, and end up living in Los Angeles, but the old car makes them want to hit the road again

“Me And You And A Dog Named Boo”

I can still recall
The wheat fields of St. Paul
And the morning we got caught
Robbing from an old hen
Old McDonald he made us work
But then he paid us for what it was worth
Another tank of gas
And back on the road again

I’ll never forget the day
We motored stately into big L.A.
The lights of the city put settlin’
Down in my brain
Though it’s only been a month or so
That old car’s buggin’ us to go
We’ve gotta get away and get back on
The road again

RELATED: We Had Joy, We Had Fun, We Had “Seasons In The Sun”