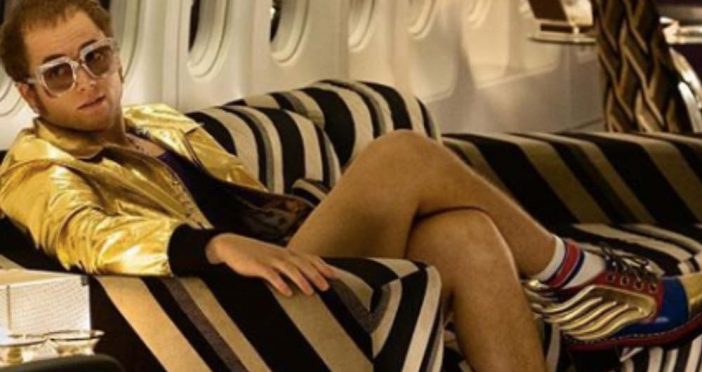 The first teaser trailer for Elton John’s 2019 Biopic called Rocketman has been released and it’s everything an Elton John fan could possibly imagine! It’s a one minute trailer that is jam-packed with essential aspects of Elton John’s life; including the glam and psychedelic outfits.

Rocketman will star Taron Egerton, age 28, as the musician. The beginning of the trailer begins with scenes throughout the film in time with a narrator who says, “There are moments in a rock star’s life that define who he is. Where there was darkness there is no you, and it’s going to be a wild ride.”

The rest of the trailer has the title song “Rocketman” playing in the background. It plays over scenes that include John performing live, flying on a private jet, and ending up on a ventilator. The biographical movie depicts some rather major points in this performer’s life.

John himself has been vocal about his support for the biopic and actually tweeted about the release of the teaser trailer. The post read, “Here it is, the official teaser trailer for #Rocketman! The epic musical fantasy arrives in cinemas Summer 2019.”

Here it is, the official teaser trailer for #Rocketman! The epic musical fantasy arrives in cinemas Summer 2019. 🚀 https://t.co/1w4TEuLYrX

Not only did the original and real-life Elton John provide some support on the release of the trailer, but the movie Elton John shared a photo from the official Paramount Pictures account. They shared a teaser photo of Egerton as John in the private plane scene.
Egerton’s words of supported included, “Can’t wait for you all to see the trailer Monday. Words cannot describe how proud and excited I am.” Paramount Pictures’ post described the biopic as ‘an uncensored human story’, so we can expect it to be as intense as it sounds and looks!

Can’t wait for you all to see the trailer Monday. Words cannot describe how proud and excited I am. https://t.co/vZU825kJMa

The film will also star Bryce Dallas Howard, Jamie Bell, and Richard Madden. Even earlier this month, co-stars Egerton and Bell were seen together sporting some funky ’70s fashion, presumably for the Elton John film.

The teaser trailer comes after the musician announced a farewell tour. John reflected on the announcement of the farewell tour and settling down with his family. “I’ve been touring since I was 17 with various bands,” he says, I thought the time is right to say thank you to all my fans and say goodbye.”

This is not the first time that Elton John and Taron Egerton have worked together. Previously, John has a large cameo role in Kingsman: The Golden Circle, which Egerton was the star of.

Please SHARE this article if you’re pumped for the newest Elton John biopic, and don’t forget to check out the full teaser trailer below!

Previous article: Disney Sells Their Own Version Of The Classic Ceramic Christmas Tree
Next Post: High School Sweethearts Finally Tie The Knot At The Age Of 50, Years After Breaking Up