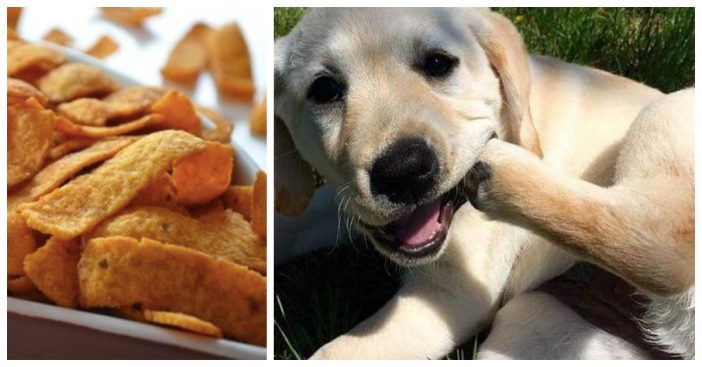 Taking care of your furry friend means knowing their odors and other quirky things. This may also mean you check out the bottoms of their paws for a common odor known as the ‘corn chip’ or ‘Fritos’ odor. It’s exactly like it sounds- your dog’s paws probably always smell like Fritos.

Not to worry, though, as this doesn’t come from the food you’re feeding your pet or anything. It’s simply a common effect of the bacteria that live on dog paws and it’s totally normal. If you’re wondering why exactly this bacteria smells like Fritos, the two types of bacterias are called Proteus and Pseudomonas and they give off a yeasty smell.

Despite the ‘Frito feet’ condition not being a danger to dogs by any means, it could definitely be bothersome to humans if the smell is radiating a bit too strong. There are certain things you can do as their owner to keep the odor under control that won’t harm your pet in any way, like keeping the fur between their nails trimmed and making sure their paws are scrubbed well.

In the event that these DIY tricks don’t work to keep the odor down, it’s best to visit your veterinarian and check out why the odor is so strong and how to stop it. If the odor is too strong, it may be a sign of infection, according to The Dodo.

So, how do does just get Proteus and Pseudomonas? Think about all the places your dog may go in just a day. Inside, outside, through dirt, grass, mud, even our own home carpets. They cover a lot of ground! By the end of the day, it’s no surprise that their paws may chalk up some bacteria with them from all of the surfaces they’ve covered.

The important thing to note is, it’s not the actual paw pad in which the bacteria is residing. The bacteria actually works its way up to the fur surrounding the paw pads and that’s when it can begin emitting an aroma that smells an awful lot like Fritos.

Thankfully enough, the two common types of bacterias really come from soil or water, so it’s not coming from a surface you need to worry about!

Check out a full video on ‘Frito feet’ below with expert insight and don’t forget to SHARE this article if you love your furry friend!