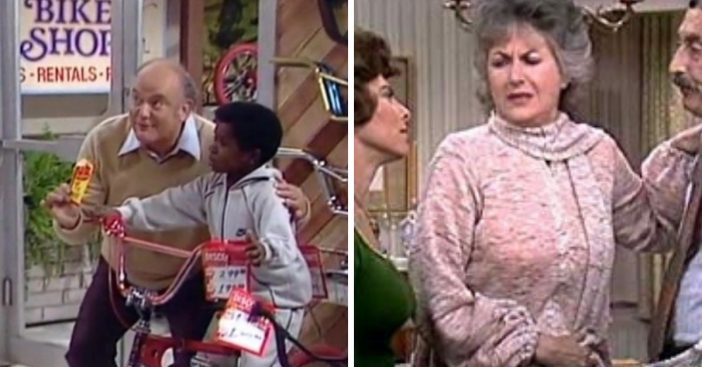 Some older sitcoms were known for pushing the envelope when it comes to sensitive issues. Do you remember some of the most talked-about scenes or episodes from some of your favorite shows in the 1970s, 1980s, or 1990s?

Here’s a list of some of the most buzzed-about episodes in sitcom history. How many of these big moments did you catch when it aired on TV?

All in the Family was a show known for tackling many subjects that other shows wouldn’t touch. Things like racism, menopause, and sexism were shown during episodes. One of the most controversial was “Edith’s 50th Birthday” in 1977. Edith was the victim of a rape on her 50th birthday and it was one of the first shows ever to address the issue of rape. It also showed the aftermath and the realistic way she dealt with it.

In 1975, M*A*S*H gave us the first death of a main character in a show. Before that, many shows shied away from this. Even if someone died in the show, it was never a main, recurring character. The show wanted to make a statement about the hardships of war. How did you feel watching this episode?

Do you remember the show Maude? In 1972, the show dealt with the difficult and very controversial topic of abortion. When the main character Maude got pregnant unexpectedly at 47, she ended up having an abortion. The show was truly ahead of its time and abortion was legalized only two months after this two-part episode aired. This topic still proves to spark a heated debate so it was extremely rare to be shown on television in the 1970s.

Newhart had one of the most talked-about series finales ever. It was very unexpected for pretty much every single viewer. After eight seasons of the show, the series finale revealed that everything had been one crazy dream! What did you think of the finale… did you love it or hate it?

The original series in the 1990s covered a lot of tough family issues. One of the most noted was during season 5 where Roseanne learned that her sister Jackie was being physically abused by her boyfriend. Roseanne’s husband Dan ended up beating up said boyfriend and landed in jail. Roseanne has obviously seen a lot of controversies since. Do you love her or hate her?

One of the most tuned in to episodes of all time was when Lucy gave birth to Little Ricky. She actually delivered her real son, Desi Arnaz, Jr. just 12 hours before the episode aired! This was in 1953.

This sitcom covered the scary topic of pedophilia. They wanted audiences to be aware and start family discussions about this serious topic.

Gordon Jump of “WKRP in Cincinnati” played a bicycle shop owner who was trying to seduce Gary Coleman’s character, Arnold.

Do you remember any of these popular sitcom episodes?

If you enjoyed this article and remember all of these episodes, please SHARE with a friend!

RELATED: 21+ Actors Who Died During Production Of Their Movies Or Television Shows