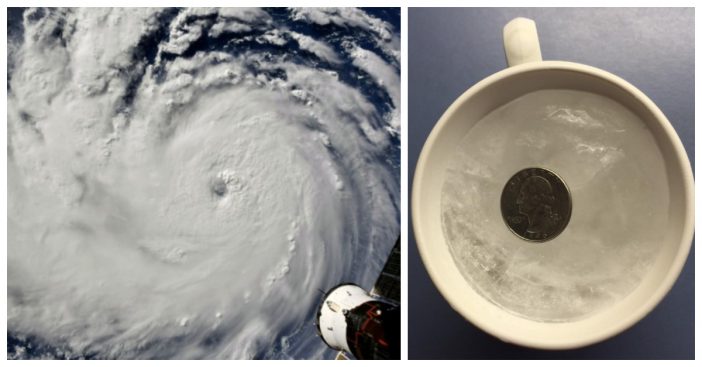 With the impending Hurricane Florence making its way toward the southeastern coastline, hurricane preparations are rapidly underway. Unfortunately, the hurricane season lasts until the end of November, so we still have a long way to go. As per a number of weather forecasts, it looks like the Atlantic and Pacific tropical activities have only just begun.

With hurricanes and even tropical storms, they can cause power outages for days to even weeks. In the event that you are presumably evacuated from your home, it’s important to know if your power stayed intact through the storm and if your foods have gone bad or not. Spoiled food can cause a slew of health risks, but there’s a trick to help you determine if your appliances were running while you were gone.

You’ll need a cup of water and a quarter.

The Facebook post provided a great deal of information for those who evacuate during hurricanes. The statement included instructions, saying, “You put a cup of water in your freezer. Freeze it solid and then put a quarter on top of it and leave it in your freezer. That way when you come back after you’ve been evacuated you can tell if your food went completely bad and just refroze or if it stayed Frozen while you were gone.”

The post followed up with some additional information, “If the quarter has fallen to the bottom of the cup that means all the food defrosted and you should throw it out. But if the quarter is either on the top or in the middle of the cup then your food may still be ok.”

The post wraps everything up by concluding that if you have any doubts about your food, just throw it away. It’s better to be safe than sorry.

The tip was originally published by North Carolina resident Sheila Pulanco Russell in 2016. The post has since received nearly 500,000 shares. Many people have commented on the post saying that they used this trick in their hurricane preparation efforts and it worked like a charm.

The last thing anyone needs after a hurricane is food poisoning! Be sure to utilize this safety measure if you ever find yourself needing to evacuate during a hurricane.

Please SHARE this article to spread awareness about this helpful hurricane preparation tip!

Previous article: You’ll Be Able To Order Real Christmas Trees Through Amazon This Year
Next Post: Category 3 Hurricane Florence To Cause Catastrophic Flooding And Hammer The Carolinas