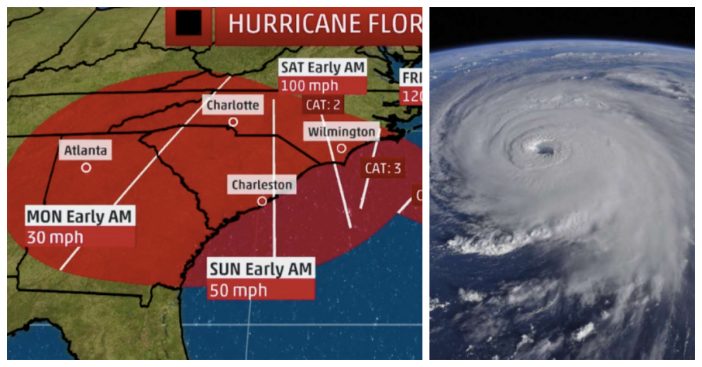 It has been recently reported by The Weather Channel that Hurricane Florence has downgraded to a Category 3 storm with winds in excess of 120 mph. Despite the storm weakening, it is still a powerful, dangerous storm that is expected to cause ‘catastrophic flash flooding and major river flooding’. Rainfall is expected to exceed over 40 inches.

While the storm is predicted to hammer the Carolina coastline primarily, the threat for inland impact also continues to grow. It appears that Florence will be making a southward dip after it makes landfall, affecting areas like Georgia and Tennessee. Additionally, landfall timing has been pushed from Thursday to Friday evening, potentially Saturday.

This storm has been uncertain from the start and experts were unsure of Florence’s potential development or its path. It’s now been named the ‘storm of a lifetime’ for the Carolinas and is still bearing the same uncertainty that it started with on August 28th, 2018 as a light tropical disturbance.

Hurricane warnings and storm surge warnings have been issued. Life-threatening storm surge is expected to occur near landfall and persist for sometime after. Mandatory evacuation orders have been in place since Monday and many have been scrambling to prepare appropriately for the upcoming storm. Tropical-storm-force winds are predicted to arrive as soon as Thursday.

If that’s not enough to convince you of how dangerous this storm is, The Daily Mail has reported that we can expect approximately 83ft waves, a 13ft storm surge, and up to $170 billion in damages. This storm is an absolute monster, despite its downgrade to a Category 3, and the 1.7 million warned to evacuate should heed cautionary measures. In total, at least 25 million residents are at risk of the storm, an unfortunate majority of those people being inland, which is what makes this storm so unique. In addition to Florence’s impending landfall, experts are also watching areas behind Florence.

Governor Roy Cooper has made a very clear statement on the storm and taking proper safety measures, saying, “This storm is a monster. It’s big and it’s vicious. It is an extremely, dangerous, life-threatening, historic hurricane. The waves and the wind this storm may bring is nothing like you’ve ever seen. Even if you’ve ridden out storms before, this one is different. Don’t bet your life on riding out a monster. North Carolina, my message is clear: Disaster is at the doorstep, and it’s coming in.”

Be sure to check out this helpful tip to ensure the quality of your food while you’re evacuated.

This is an extremely dangerous storm and despite any weather forecasts or predictions, it is advised to every single person affected by this hurricane to take the necessary precautions.

Please SHARE this article to spread the news about Hurricane Florence’s persistence.

Previous article: How The Cup And Quarter Trick Can Help With Hurricane Preparation
Next Post: Drunk, Naked Florida Man Burns House Down After Trying To Bake Cookies On A Grill