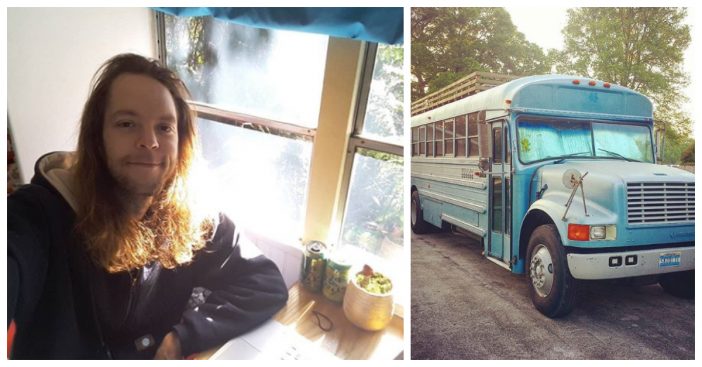 Have you ever wanted to just live a minimalist lifestyle, throw away everything you know about living in a traditional home, and live in a school bus full-time? Patrick Schmidt did just that. He was originally setting out to downsize his home, but when he purchased a 1990 school bus from a church for $4,500, plans changed.

Schmidt and his dad began working on the bus to make it a livable, mobile home, equipped with utilities and food, too! Upon purchasing the bus, Schmidt actually drove it from Long Beach, CA to Las Vegas where he would begin to work on it.

Schmidt used materials mainly from Home Depot and Amazon to construct his new home. The whole project took about three months to complete and $9,000 later. The first order of business was taking out the original bus seats and renovating the roof. An additional neat thing about the roof is that Schmidt installed solar panels, meaning he is able to reduce his electricity usage.

Despite how it may have looked before, it actually is a livable home! It is equipped with a sink, toilet, shower, and an air conditioning unit; all essential things when traveling long distances or living in a home. There’s also a mini-fridge and freezer. However, there is no microwave, coffee maker, or oven, but Schmidt has an alternative for that.

He actually uses a hot plate to make one-pot meals, he brews coffee with an aluminum espresso maker, and cooks up stir-frys, pancakes, and other meals with a frying pan. Going by this ‘minimalist’ mindset for living has helped Schmidt reduce waste.

Schmidt has commented with insight on how he lives in such a small, minimalist space. He said, “[The fridge] allows me to buy and store exactly what I need and what will fit, and I barely ever throw anything away because I I know what I have and need to get rid of for space.”

He also commented on the use of the solar panels on the roof and the usage of the hot plate, saying, “The hot plate simply draws too much power for the bus batteries and converter to create, so I use a camp stove which uses a butane bottle.” However, most of the time Schmidt opts for healthier and easier foods like veggies, fruits, and nuts.

Typically as Schmidt drives around to different states, he will often stop at the local groceries and supermarkets to pick up fresh produce. This is something he makes a point of at every stop. Since renovating the bus and making it his home, he has since traveled a 10,000-mile road trip and has visited all 50 states.

Please SHARE this article if you loved this renovated bus home!