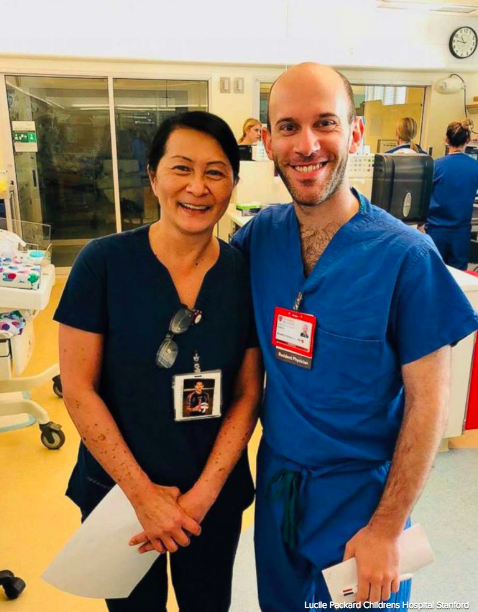 Turns out that a nurse who had been working in a children’s hospital for more than 32 years got paired up with a 28-year-old coworker she had actually cared for 28 years prior. Vilma Wong had been working at Lucile Packard Children’s Hospital Stanford when she was paired with Brandon Seminatore.

Wong issued a statement on the reunion, saying, “I asked who he was and his name, and last name sounded very familiar. I kept asking where he was from, and he told me that he was from San Jose, California, and that, as a matter of fact, he was a premature baby born at our hospital.”

At one point, Wong’s curiosity got the better of her and she decided to just ask Seminatore herself. She first asked him if his father was a police officer, but this was followed by silence. Seminatore then asked if she was Vilma, and of course, she responded “yes.” It was like he just knew.

According to Seminatore’s mother, she had asked her son to look around for Vilma Wong, a nurse who had taken care of him at the hospital when he was a baby.  “I was in shock initially but overjoyed to know that I took care of him almost 30 years ago. And now he’s as a pediatric resident to the same population he was part of,” Wong said enthusiastically.

Seminatore texted the photo above to his parents when he realized he had been reunited with his first ever primary doctor. The photo details Wong holding Seminatore in her lap, just days old as a premature baby.

Seminatore’s parents had informed their son about his condition as a premature baby and how he had needed to stay with a nurse to ensure he was okay. He allegedly needed an incubator and a ventilator to help him breathe. He was watched over very intently to ensure he would be okay.

“Meeting Vilma was a surreal experience. I never expected to meet a provider who took care of me when I was a baby,” Seminatore explained in a statement, ecstatic about the venture.

Looks like this is the beginning of a beautiful friendship!

Be sure to SHARE this article if you loved this heartwarming reunion story!