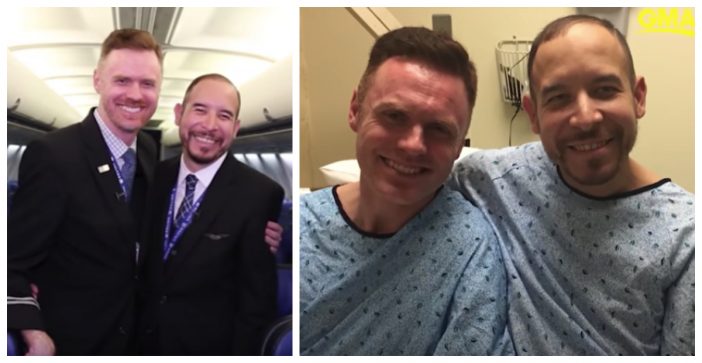 United Airlines flight attendant Jair Ripoll recently revealed to his co-workers that he was diagnosed with hereditary kidney disease and would need to look into a donor. However, he never imagined that the donor would be his co-worker.

After dealing with the disease for about ten years, it was worsening quickly, and he learned that he would need a brand new kidney in order to live. When co-workers learned of his condition, Steven Lepine sprang into action to see if he would be a match.

Jair posted about his condition and hopes of a kidney donor on Facebook. Steven responded within seconds offering to be tested to see if he would be a match. While Jair was extremely shocked that someone he worked with so closely already would offer one of their kidneys for him.

For Steven, the decision to help was imminent. “I thought we probably won’t be a match but this is something that I can do as a human being. That’s the way my parents raised us, to lend a helping hand,” Lepine told Good Morning America.

Steven ended up being a perfect match and did not hesitate to accept, even though Jair gave him the opportunity to back out if he wanted. Of course, Steven disregarded that offer and went through with it anyway.

They set the date for the procedure at just the right time. Jair’s health was rapidly deteriorating and needed the kidney transplant done ASAP. Afterward, it really was smooth sailing.

After the procedure, Jair recovered quickly. Steven encountered minor post-surgery complications but was able to return to work in a matter of weeks. Jair now says that he feels that he and Steven are more than friends, but more like brothers. The experience has made them closer, and they have even spent holidays together with their families.

“I’m so grateful to God that he took that big step to save my life,” Jair said of Steven.

What did you think of this heartwarming donor story? Be sure to SHARE this with your friends and family if you loved it!

Previous article: 4 Vintage Train Cars You Can Now Rent As Vacation Homes On Airbnb
Next Post: 5 Most Trend-Setting Hairstyles That Came Out Of The 1980s