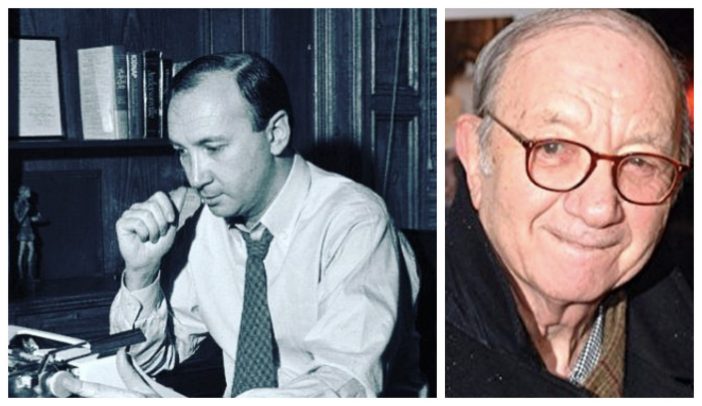 It has been reported that Neil Simon, author, playwright, and screenwriter, has died at the age of 91.

Simon died the morning of August 26th, 2018 at 1 A.M. Eastern Standard time after being on life support. Prior to his death, he had been fighting kidney failure, in addition to Alzheimer’s and dementia.

Neil Simon was born on July 4th, 1927. He had a bit of a rough childhood. He and his family lived through The Great Depression, which brought on tumultuous financial troubles which caused his parent’s marriage to become unstable. As he grew up, he was sent to Colorado as a corporal for the Army Air Force Reserve. It was there when he would discover his passion for writing.

Simon was well known for being an incredible playwright. His very first Broadway play was called Come Blow Your Horn in 1961, but his biggest hit was easily Barefoot in the Park in 1963. Additionally, he received an abundance of award recognition for his work in The Odd Couple, Biloxi Blues, and Lost in Yonkers. Other popular shows that have been critically acclaimed today are Promises, Promises, and A Chorus Line that Simon had written material for.

Simon wrote more than 30 plays in his lifetime and also has a Broadway theatre named after him. He wrote for more than 20 films and, in addition to being extremely involved in the theatre show business, he was also active in television as well. He wrote for the television shows, Your Show of Shows and The Phil Silvers Show.

TMZ has reported that there is a memorial service being planned for Thursday, August 30th, in New York City.

Please SHARE this news to honor this legendary playwright’s legacy. May he rest in peace.